Attention: CLOSURE - the Eldorado Canyon SP staff has placed a closure for a confirmed turkey vulture nesting as of 7/3/20. This applies to Heart of Gold, Rush Buick, Emergency Brake, The Squeamish, and Nobody's Home.

Attention: the Eldorado Canyon SP staff has informed us that Heart of Gold, Rush Buick, Emergency Brake, Nobody's Home, and The Squeamish are closed until further notice for turkey vulture nesting. Please respect this closure. This notice came out Aug. 22, 2019.

Attention: CLOSURE - the Eldorado Canyon SP staff has placed a closure for a confirmed turkey vulture nesting as of 7/3/20.

The Squeamish is a spectacular but dangerous route that rates somewhere between a bomb and one star. A bomb for the major loose rock above the crux, but one star for the good and sustained climbing to that point. I'll give it one star as a toprope.

We forgot the guidebook, so we decided to try this obvious line just right of Nobody's Home. I figured it was at least 10 and probably S, since I was familiar with the easier and better protected routes in the area. I ended up bailing (via a rescue from our partners' rope as they rapped from the Nobody's Home anchor) from about halfway up at the fixed pin after making a good effort. We ended up TR'ing it after leading Nobody's Home.

Rossiter calls this 10b/c S, but it felt harder, and it is, I think, worse than S. The fixed pin in the orange corner flexes like rubber. I was afraid to yank down on it. There is only marginal backup. I got a tiny brass in a good placement a few feet below the pin and an almost parallel-sided brass placement near the pin. Not only is the gear at the crux bad, but the approach is S-ish on sustained climbing. And the rock above the crux, as you approach and clear the roofs, is very loose, with the potential of pulling off big blocks. This is way more serious than, say, X-M, South Face of T1, Metamorphosis (S is on 5.8 climbing), or Backtalk (runout on 9 but above a good bolt and on good rock), which are all of a similar grade and rated S. The Squeamish is runout on the crux climbing above bad gear with a potential 40 foot fall if/when the pin and the bad backup fails. And after that you get some gear only to encounter some really bad rock.

When I read Rossiter's "clip stick and tape" recommendation I thought, "there's nothing to stick clip, and there's no cracks that require tape." But after thinking about it, I suspect that the FA party stick-placed a nut above the fixed pin. That might make this route S rather than VS.

There was chalk on the climb, so I suspect that this is occasionally TR'd from the Nobody's Home threaded rappel anchor (which is what we did). Rappeling from that anchor brings you directly to the crux dihedral, so it's easy to TR. We were climbing with double ropes, so we could make the TR a bit safer by running one rope through a directional further right, thus providing a more straight up top rope as the climber wanders right, then left and then back right.

Getting there: See Rush Buick and Die Heeda Rule for directions to get to the vicinity of this climb. A little right of Rush Buick is the shallow, right-facing, right-leaning dihedral of Nobody's Home. Right of that is another shallow right facing corner that ends, and above that is a large right facing orange corner. This is The Squeamish. Just right of this is a large, left-facing, easy, grungy corner that can be climbed to avoid the first part of The Squeamish (or downclimbed for a rest).

The route: climb the initial right-facing corner which is, as for Nobody's Home, much harder than it looks at about 5.9. The gear is good, but it's hard to hang out at a couple of spots. When the corner ends, get a piece in the flake above and move right to a right-facing corner. Get gear in the corner. After getting this gear in, I descended and unclipped the right rope from all the gear on the left so that it ran straight to this point. The section from the right-facing corner traversing left into the orange corner is .10 something. Step left of the right-facing corner and climb a vague groove to a small flake bucket. You can get a good nut here. Reach let to another flake, which also takes a good nut, although this flake is thumpy. You can, instead, climb straight up to this point, but the gear would be worse. Step left and reach up to an angled block which is disturbingly thumpy and step up to a stance at the fixed pin. To retreat from here is pretty serious without a rope from above. There is a tiny nut at your knees that would take body weight. My plan, before the rescue rope magically appeared from above, was to downclimb with one rope through this nut (I didn't trust the pin at all) with the other rope through the lead gear, cleaning as I downclimbed.

The crux: Thin laybacks and some smears get you a jug. Some more tenuous footwork gains a stance below an overhang. Move right around a corner to a jug and a good rest. The rock above this is very loose, so be careful, and have the belayer move left out of the way. Another medium hard move, scary because of the loose rock, gets you good holds at the roof. The roof is easy with big holds. Angle left above this to the cave and anchor above Nobody's Home.

Double cams from micro to finger sized. Singles above that to #2 Camalot. Single set nuts to 1", double brass nuts including tiny. Double ropes and lots of long slings. Clip stick and tape? Helmets for leader and belayer due to loose rock. There is one very bad fixed knifeblade at the crux. 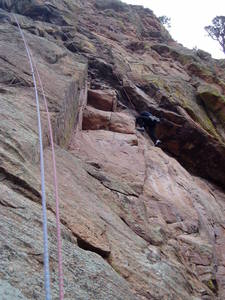 On the loose rock below the roof. The TR is not… 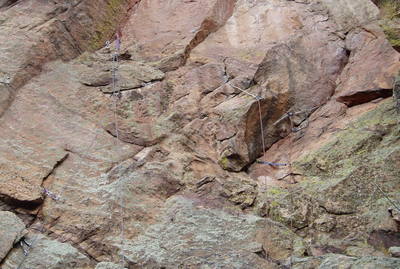 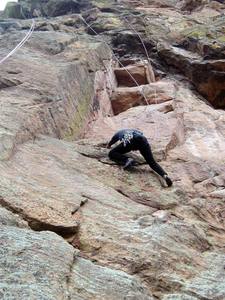 Finishing the traverse into the red corner. The… 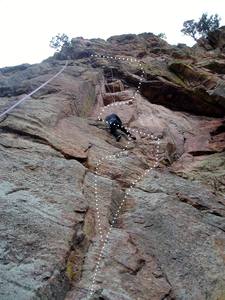 Haven't had a "screwed up photo" for a long tim…

More About The Squeamish