The Bowels of the Owls

This is typically used as the descent route for routes to summit Twin Owls. It can also be used to ascend Twin Owls with reduced technical difficulty. Due to the above uses, traffic jams may be encountered. It is likely the technically-easiest way (vs Cheechako) to summit the formation. It can be wet and/or cool. In a wet winter, it can have snow or ice. Also, it may be ascended by small climbers as young as six years of age.

Approach via the Gem Lake Trail from the Twin Owls parking lot, pass the Lower Twin Owls climbers access trail, go uphill at the Upper Twin Owls climbers access trail (also approaching Gollum's Arch). Go past the trail that splits to the left (to the Roosting Ramp), pass Hen & Chickens, and pass the approach for the East Ridge. Find a deep cleft near a standing, broken off dead tree around on the NE side of Twin Owls ascending a weakness between the East & West Owls. High traffic down this cleft may also make it more obvious. In the near future, access may be out of a westerly trail out of the soon-to-be-built trail from the new (further East) trailhead. Pay some attention to the trail as you ascend, or you will wind up on the old (less preferred by the some) trail.

To approach from above, to use this as a descent, you go to the third class saddle area between the summits of Twin Owls (separated by about 100 feet). It can be less-than-obvious. From here you go down a wide, steepening gully 4th class to the NE (towards Gollum's Arch) about 100 feet to a even steeper section, traverse left around a small rib on a slab to a chockstone and what looks like a cave or big rabbit hole. Downclimb through this cave into a dark, narrow, left-angling chimney about 70 feet. If it's too wet or whatever, you can rappel slinging a chockstone above the chimney (better) or the block that you hop over to get into the chimney (worse). It's a funky, slithering rappel.

P1. Go up the chimney with some loose gravel in spots. About 50 feet up, you reach the first technical challenge with a crack/flare on the right with slicker foot holds on the left. Chimneying can be a bit of a challenge if you are large. Reaching up can be challenging if you are tiny. This can be funky if wet. A hand sized cam works here. Then, just above, you find the 'crux' with smaller holds on a slick slab for a short stretch to a bucket. This, too, can be funky if wet. A yellow TCU/Alien or cam be helpful to protect your second, especially if tiny & inexperienced. Traverse left to the exit of the chimney & belay, 70 feet.

P2. Traverse left about 15 feet on a slab around a small rib (exposed for the tiny or timid). Ascend the gully 3rd to 4th class to the saddle. About 120 feet.

P3. From here, you can make a 3rd class scramble to the East summit or a more exposed, and somewhat more difficult bit to the West summit block.

To descend, downclimb back to the notch. Downclimb the gully to the chimney. Downclimb or rappel P1. Be careful not to rap the outside of the chimney or your ropes may get stuck.

It has been rated 4th class in some guidebooks.

It has enough features and short-enough traverses to allow a shorter (6-8 year old) to ascend without excessive difficulty. 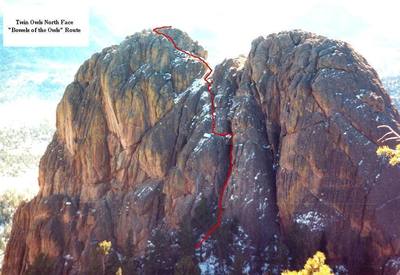 The Bowels of the Owls. This is the standard de… 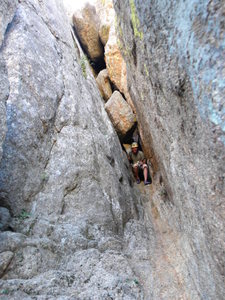 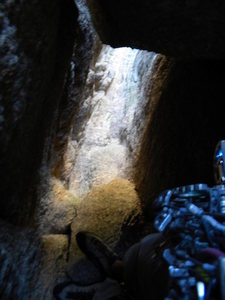 The limited view down the Bowels from below the… 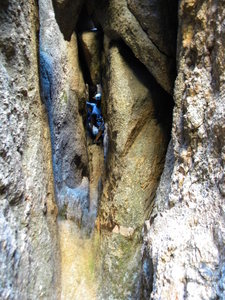 Jason Estes downclimbing through the Bowels.

More About The Bowels of the Owls