OSMP is enacting a closure to protect cliff nesting raptors at Der Freischutz on Dinosaur Mountain — please see the attached map. The closure includes the BUBBLE and the Dinosaur Eggs formations.

On Wednesday of this week, OSMP staff and volunteers observed that the prairie falcon pair that typically occupies Bear Creek Spire had relocated to the Der Freischutz formation.

The pair’s timing is in the ballpark that if they succeed and fledge young, the formation will open with other closures on or about July 31st.

As a result of the move, OSMP is lifting the closure for Bear Creek Spire.

Those approaching Overhang Rock from Mallory Cave trail will need to approach from Bear Creek Spire going forward or until Bear Canyon trail is reopened. 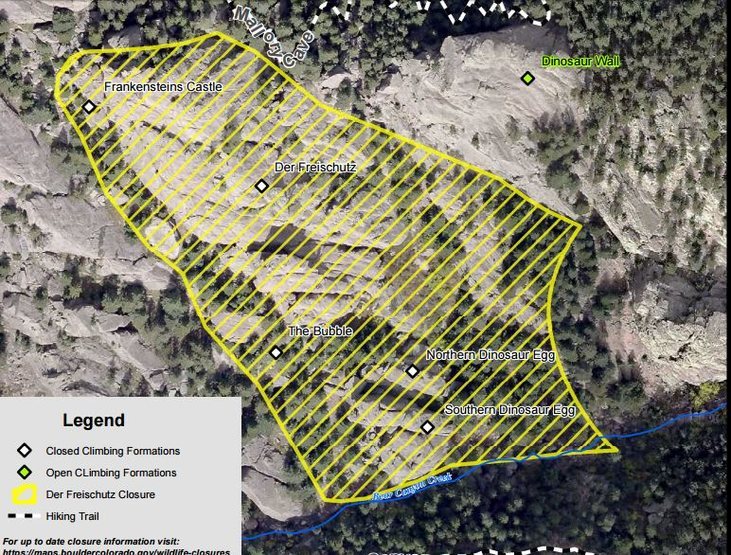 This is just one of those lines that is obscure but is sort just asking to be climbed when perusing R. Rossiter's Flatirons guidebook, p 106. It lies on the East face parallel & just North (right) of Rehatch. It's probably a route only for the Dinosaur Mt. fans looking for yet another line. It is a bit rough around the edges. Precarious flakes along the way suggested few, if any, prior passages. It looks harder than it turns out to be.

Hike from NCAR to the Mesa Trail. Head South to Bear Canyon trail. Hop across the creek at the base of South Dinosaur Egg (just above the 2nd waterfall, springtime) and curve around the East face of North Dinosaur Egg. Come to the 3rd class approach to Rehatch, and start below a small overhang.

P1. Work up a small slab at an alcove, moving left to a good stance below the small overhang. Place a large cam and bear hug a large knob on the left, weird 5.7. Follow a low angle groove to a belay below a chockstone. #0.75 & 3 Camalots are useful for the belay, 190 feet.

P2. Head up, place an Alien, and then go left on a friable slab to the overhang. Bear hug your way up to a good ledge, strenuous 5.7. Decipher the crux above with a good #1 Camalot. It has rough rock here. Heave up into the groove. Follow it with an occasional jaunt left. Near the top, follow a groove off right to the summit, 180 feet.

Move briefly West to the 40m rap (bolt & pin). This can be done with a 30m rap & 4th class downclimb on the slab. Watch the rope on the pull. 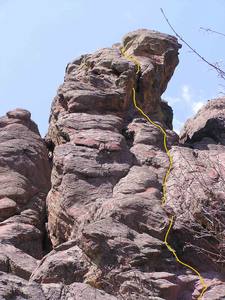