This is a fun, slightly-overhanging sport route with huecos on a WSW buttress next to Dinosaur Rock. The rock is still a bit friable partly due to lack of traffic and partly due to its overhanging nature. It is the left of the 2 bolted lines. It is not listed in either of R. Rossiter's Boulder Climbs North nor Flatirons guidebooks. It was shown to me by Scott Resnick. He informed me it was 5.9; however, it feels a bit stiffer. Some may find it harder than my rating for an on-sight.

Find this route by on a small steep buttress next to Dinosaur Rock access via NCAR to the Mesa Trail then either hiking up the Mallory Cave Trail until above the top of Dinosaur Rock and hiking briefly down the second gully between it & Der Freischutz (between 1st & 2nd strata) or hiking South on the Mesa Trail to the Bear Canyon Trail, crossing Bear Creek, and up the gully between the 1st & 2nd strata. You can see this buttress well from the top of Rehatch or Cloudwalker on Northern Dinosaur Egg. You can scramble/climb around the back of the formation and set up a TR with a directional off the 5th and/or 4th bolts (the anchors lie left of the line).

Fire up huecos which must be carefully used to keep the rating as above. Apparently, this route was originally led with cams, no bolts. Apparently, it has been retrobolted, oh well. It is continuously overhanging, but it has plenty of jugs. The 2nd bolt is on a small shelf that leaves any clipped biner partially hanging over a ledge (don't fall). It is probably best to back it up with a spectra or Kevlar sling threaded through the bolt. You can plug in a #3 Camalot in a hueco maybe 5 feet higher. The crux is just above the 4th bolt utilizing a key hueco sidepull. You hop right onto the South face and find the 5th bolt along the West most edge of the South face. The anchor bolts are okay, but currently the chains are very rusty. They are set back from the edge, so that 48 inch slings are required to reduce rope wear for belaying from below. This is a fun route. It is a reality check if it is consensus 5.9. It is approximately 60 feet.

Apparently, it was referenced in an old Rock & Ice article. Which issue? Page?

Finally, the hangers are all old style SMC hangers. Maybe they could be updated?

5 QDs, a #3 Camalot, 48" slings for the anchor. Originally climbed with Friends and then retrobolted. 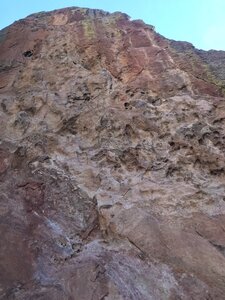 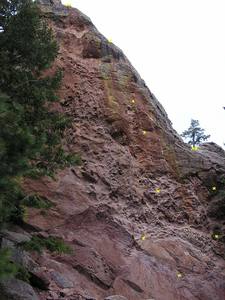 The route. As John RB notes: Tracks are for… 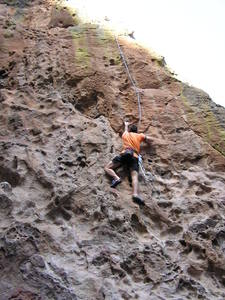 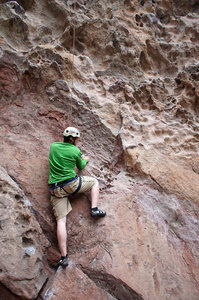 View from the base of the climb.