This route is located just above the huge gap in the East Ridge. It follows a beautiful face just right of a jagged, left-leaning arete.

Start with the burley, slightly overhanging hand and finger crack in a gully. A few 5.10 moves right off the deck lead to a thin, reachy 11b section (lower crux). Continue up to a broken ledge with a small tree below the first bolt. Gear isn't great at the ledge. I slung a horn but some tricky nut placements may also work to protect the moves up to the first bolt. There are balancy 5.9+ or 5.10 moves in here, so be careful, as a fall here would probably land you on a ledge.

Once at the first bolt, follow a line of bolts up and left through a beautiful section of steep rock. The rest of the route from here is fairly sustained, with many 5.10 and 5.11 moves throughout. Lots of tricky traversing moves with sometimes hard to see holds, groping reaches out to the arete, and general funkiness. Although fairly well bolted, falls at some of the hard moves would result in some high angular momentum whippers due to the traversing nature of the route.

The crux was probably just past the 4th bolt, although another 11b or c section awaits out near the arete at the 6th bolt. The climbing eases off to 5.9 or 5.10- for the last 15 feet to the hidden anchor up and right of the final scooped out face. Absolutely excellent, sustained climb with great position and exposure most of the way! Rappel 90 or 95 feet from the 2-bolt anchor. The webbing was pretty mankey and not equal-tensioned at the time I originally wrote this, though Matt S. thankfully upgraded the anchor and bolts in 2010.

Nuts and camming devices up to 1 or 2 inches are needed for the initial steep crack. Once up to the first of 8 bolts, quickdraws will generally suffice from there, though a #3 RP or similar and a sling can be used between bolts #2 and #3 to reduce the spice in that section. 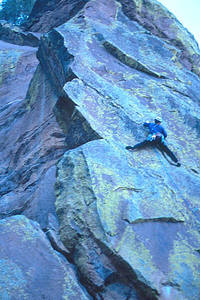 Near the crux traverse. Photo by Ico.