Start from Maroon Lake Trailhead, and hike the Maroon trail via the Maroon-Snowmass trail until you are level with the bottom of the north face basin. From here, traverse across the bottom of the basin under the north face until you are under the ridge. When you reach the bottom of the ridge continue traversing on some ledges below the ridge to the south, until you reach the first grassy east facing gully leading up to the ridge. Be sure you don't hike beyond this gully; the rock gets very loose, and cliffs out. From the east facing gully, scramble up the gully until you join up with the northeast ridge. At the top of the Gully you might encounter a few short class 4 cliff bands. Once on the ridge follow it to the summit. While on the ridge, you might confront a few class 4 bands with some exposure. Overall, if you stay somewhat on route, the rock is fairly solid, and despite how loose they reference the rock conditions to be in the fourteener books, it is not that bad.

A rope and some slings if you want to rappel the short class 4 cliff bands down, but it is not really needed.

From Martin le Roux: from Maroon Lake, follow the Crater Lake Trail and then the Buckskin Pass trail. The North Maroon approach trail leaves the Buckskin Pass trail at 10,800', about a mile after the junction with the Crater Lake Trail. Cross a creek (Minnehaha Gulch), and zigzag up scree slopes for 1/4 mile. At 11,200', swing left and contour for about a mile across scree slopes below the North face of North Maroon. The trail then climbs up, and at 12,000' it crosses the NE ridge into a broad, East-facing gully. Zig-zag up the gully, and at 12,600' cross over to the left into another East-facing gully. Head up the 2nd gully to gain the crest of the NE ridge at 13,200' (some 3rd-class rock steps). Stay on the North side of the ridge, and follow it to the summit, climbing a short 4th-class chimney through a rock band at 13,600'. The top part of the route above 13,200' holds snow until early summer. 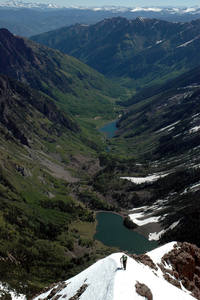 Dave cruising the ridge below the summit (June… 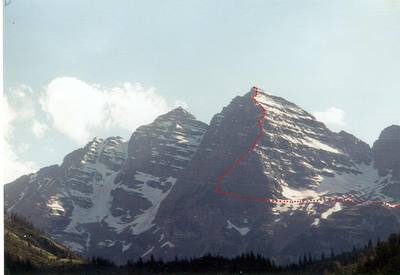 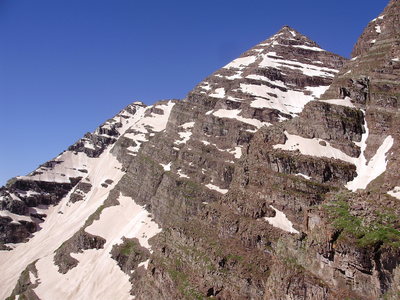 S. Maroon as seen from the trail up N. Maroon. 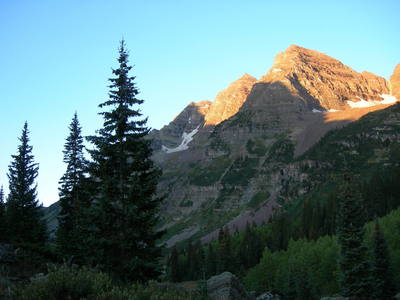 Sunrise on the Bells. 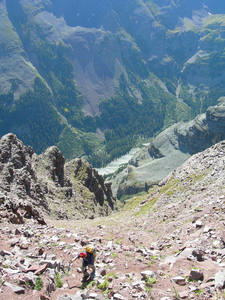 Ben Williams as seen on a typical view of the N… 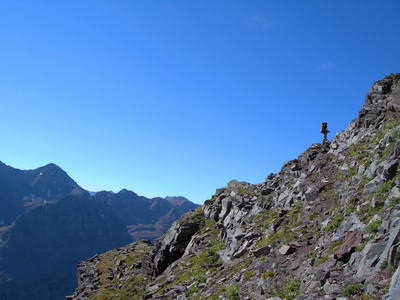 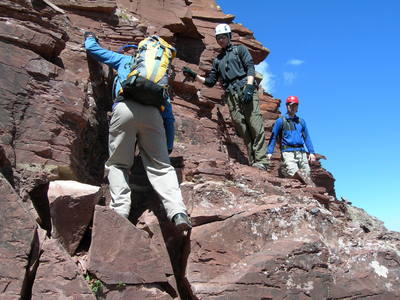 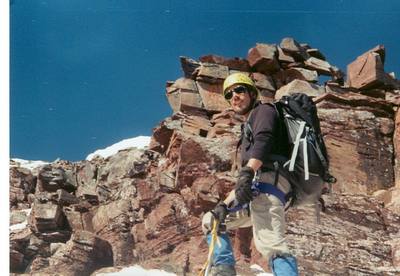 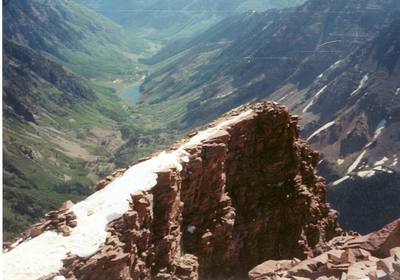 Looking Back at Maroon Lake just below the summit. 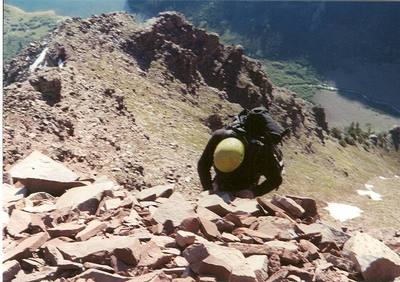 Finishing a short cliff band at the top of the…