Prancer Ridge ascends a ridge on the left hand side of the cirque formed by the east face of Mount Yipsilon. It is entirely separate from the Donner Ridge but finishes in the same spot.

Approach as for Spectacle Lakes. After getting to Yipsilon Lake, go all the way down to the lake and cross a bridge. Immediately after the bridge, find a faint trail that goes uphill, following the inlet stream to Yipsilon Lake. The trail stays mostly on the north side of the inlet stream. After about a quarter of a mile, look for a stream coming in from the north that cascades down a very steep gully. It is just after the trail crosses a small wooden bridge. Cairns give some idea of which way the trail goes up the gully. By picking a way carefully and weaving around any obstacles, it is easier than it looks. The reward is the splendor of Spectacle Lakes. These are truly a hidden jewel. Fortunately, it takes a lot of work to get there. It keeps the riff raff down.

Work around the Spectacle Lakes on the left or south side. At first, detour high around a cliff that blocks the beginning of the first lake. The rest of the way around both lakes is pretty easy.

There are 2 ways to approach the start of the ridge that forms the left hand side of the cirque formed by the east face of Mount Yipsilon. The 1st and most direct is to climb straight up the snowfield at the back of the second lake up to the point where the Y Couloirs branch off in separate directions. The ridge immediately to the left of the left hand branch of the Y-Couloir is the objective. This requires climbing a long snowfield, even into August. Some technical rock may be exposed about halfway up the snow field. A much saner option, especially if you are inclined to climb mostly on rock, is to approach from the left and angle up to the beginning of the ridge from the 2nd lake. The angle of the traverse will be obvious as you work your way around the lakes. Just look for a series of grassy ledges leading up and to the left, terminating just below the start of the ridge.

Once established on the ridge, begin climbing up and to the left, generally keeping with the crest of the ridge. Weave left at first to surmount a small roof, but in general, stick with the path of least objectionable rock. It is pretty gross in places. Don't blink or you will miss the crux. Come to think of it, I can't remember where this route is 5.6 at all. Overall, it makes for a neat day of scrambling, if you are inclined to do so. This route isn't recommended necessarily as a roped, technical climb, but it probably would make a dandy of a winter route, if you could get to it. Climb the ridge line to its top. This is the junction of Donner Ridge and the summit plateau of Mount Yipsilon. The true summit is just a short scramble to the north or climber's right.

For a quick descent, turn left, or south and carefully descend the south face of Mount Yipsilon. It isn't very technical, just long. At the bottom of the cirque, turn left or east and work your way back to Yipsilon Lake. Don't forget to look for the fixed technical Friend. It's reassuring to know you are actually on a route. Even though this climb gets 1 star, it is an awesome day out in a remote wilderness setting where you will probably not run into any other people above tree line and very little evidence of people having traveled before you. Cheers.

Are you kidding? Take an open mind. The route is easy enough to not warrant taking a rope or a rack. If you are so inclined as to take gear, a small standard rack will do. Nothing big is needed. 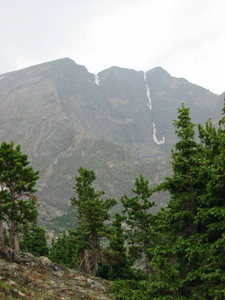 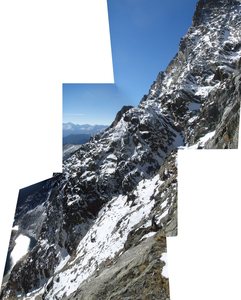 Prancer Ridge. I had to eliminate parts of the…