Routes in The Bastille - N Face

This route sees some traffic, but is one of the less-traveled 'popular' routes on the Bastille. The name, Wide Country, does nothing to describe the cracks in it, which are seldom larger than small-stoppers. The name more well describe the amount of territory covered in order to climb the route - lots of back and forth and rising traverses, some of which are not closely protected. The route is good, with a typical Eldo crux on the first pitch. It's thin, a little off balance, and committing, but well protected. After the crux, the route lets up enough to let you recover from your pump, or climb despite it. The second pitch is more obscure and less protectable, but can be avoided by doing the (superior) finish on X-M to Outer Space.

To climb the route: P1: Begin to the right of Bastille Crack and start up into a shallow, left-facing, 5.9 dihedral, climbing up past scant protection (if you bother with any) and after some distance getting gear and stepping right into a second, more broken corner system. At the top of these cracks, perhaps 70' up, you arrive at a decent fixed pin, and then a bolt. Clip the pin with a long runner, then the bolt with a short one, then go hard left through the crux. 2 bolts lie above this previous pin, but are of a different route. From the bolt go up and left on mild runouts through easier territory, aiming for the bottom left side of a hanging flake. Place gear along the way on long runners if desired. On the hanging flake, you can place a 0.75" (+/-) cam or two on a long runner on its left side before launching out under it and up under it to the right, where another cam can be placed 1-1.5" before rising up under the flake (5.10b/c, S?) to a right-facing corner to reach the bolt and chain anchor. According to the Rossiter book, the climbing can be made easier but no less runout by traversing out on the face and then climbing upwards to skip the rise under the flake. The bolted belay is good; it would require 2 ropes to rap from.

P2-P3: An obscure and seldom done line traverses directly left from the belay and then climbs up a fairly indistinct line parallel to the Bastille Crack. (with a fixed pin at the first crux, and gear at the second). Then follow a left-facing corner (10b,S) left of Hairstyles and Attitudes to the top. P2-P3: Better yet, from the bolted belay, continue on X-M to Outer Space or one of the many other possibilities.

A few fixed pieces along the way, particularly protecting the crux. The trad gear is RP's + stoppers + narrow cams to 2". Don't bother with doubles of anything. Take a good number of 2' runners. There are significant runouts in the 5.9-5.10- grade, but after the crux, falls would probably be clean and relatively safe. 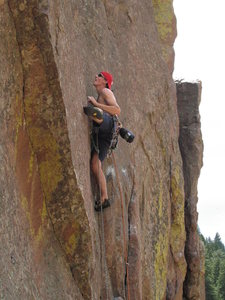 Scott getting ready for the crux reach on Wide… 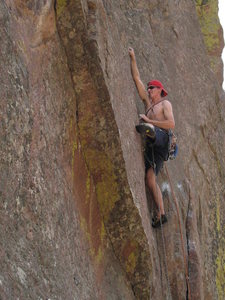 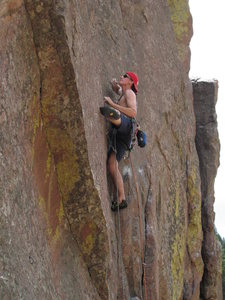 Scott mid-reach at the crux.