Routes in One Shoe Makes It Murder

This is the beautiful almost vertical slab on the left side of the cliff. Star near a tree and climb up on good holds to tricky move past the second bolt. Reach a small ledge and fire up the slab making several tedious moves (crux) on small holds. Reach a good hold at the sixth bolt and climb over a small roof to a ledge and the anchor. Great route bordering on three stars. AC, bring some edging shoes, you'll like this one.

Seven clips will get you to a two-bolt anchor. 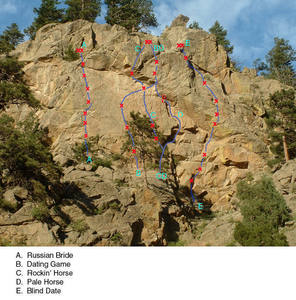 One Shoe Makes It Murder wall.