To find the start of the route, descend the Cruise Gully. After the second rappel, continue down the gully along the base of the rock until reaching a large, right-facing corner, about 200 feet high. You will see the obvious offwidth above.

P1. Ascend the 5.9 corner, and climb the 5.7 V-shaped groove past a roof easily for a full rope length. The alternate start is to begin to the left of the corner making an unprotected 5.7 slab move to regain the line. It is 200' to an old pin belay on a ledge.

P2. Head straight up a wide crack past a slight bulge, passing two old pins on your right to an alcove where there is a two-pin belay with slings, 5.9, 125-150'.

P3. Begin off the belay passing a small chockstone, and squirm up the chimney. Exit on the left, and ascend the offwidth. There is one old bolt on the right as you ascend, but you can get natural gear to a two-pin belay, 5.10, 130'.

P4. Ascend the sustained, thin, right-facing corner with stems and laybacks. It is 5.10+ for 155 feet. Both of the guidebooks we referenced mention a small traverse of pegmatite at the top to a one-bolt belay. This bolt is nothing you can count on for a belay, and you are better off continuing to a small ledge above where the Scenic Cruise merges 5.8 R, or belay below the pegmatite in the crack and ascend a small pitch, 40' to the ledge above.

P5. Belay at the horn on the far right where the Scenic Cruise comes in and ascend the sustained, 5.10+, overhanging corner, past a roof and up a wide crack (5.8?) and over easier ground all the way to the bivi ledge where the Gross-Logan merges with the route, 170'.

P6. From the bivi ledge, ascend either the crack on the right or left, (we took the left) past a very nasty thorn bush, be ready to do battle with it, to an easy chimney heading left at its top to easy ground. Belay below the large flake, 130'. Combining this pitch to above the flake can be done, but beware of rope drag.

P7. From below the large flake, trend to the left and ascend interesting ground up behind the flake some funky moves, climbing on top of it and exiting to a new two-bolt belay at the start of the Pegmatite traverse, 70'.

P8. Traverse straight right 5.7 (the guidebook mentioned fixed gear, we saw none) then up past three bolts ascending through the pegmatite, the third bolt has no hanger, it is 5.9R to a belay stance, 150'.

P9. Ascend the awkward bulge/crack above the belay, for a short pitch to a good ledge, 5.9+, 50'(possible to combine with Pegmatite traverse).

P10. Traverse left on loose flakes to a right-facing corner with an old fixed #3 Camalot, and ascend straight up the obvious feature to a belay, 5.9, 150'.

P11. There appeared to be a few variations for one more pitch of climbing, we took one straight up on 5.7-5.8 climbing to a nice stance with one more difficult section above. A short section of 5.9 gets you off the route proper.

P12? Not really, but you are or should now be on one of the terraces and easy scrambling to get to the Nature Trail/Overlook on the rim.

Be prepared for strenuous climbing on the offwidth and the two pitches following it. Start as early as you can ,and you will still probably finish at or near dark. We began climbing @6:30 am and topped out at 9pm. We did a little simul-climbing on the first pitch to combine the first two (as the guidebook calls it) as one and combined pitches, 6-7, 8-9, and tried to for 10-11 but ran out of rope with our 60m cord. Make sure you are on top of your game; this is a strenuous, long day physically and mentally. The grades are "old school"; be ready. Helmets are a personal item, but I was glad I wore mine. You will not soon forget this climb or the day.

Standard Black Canyon rack to a #4.5 Camalot for the offwidth and small nuts/RPs for the pitch above the offwidth. 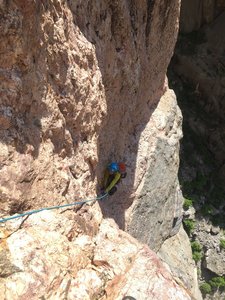 Ryan Dresser navigating the .8 R peg after the… 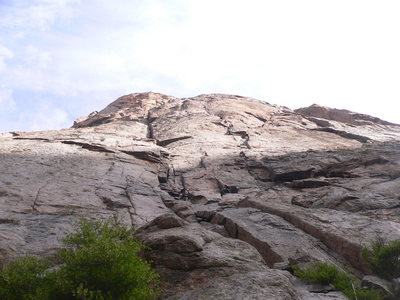 Aaron climbing the 2nd pitch of The Cruise. 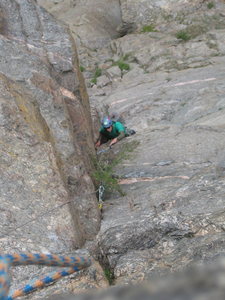 Phil Lauffen making his way up the "10+" stemmi… 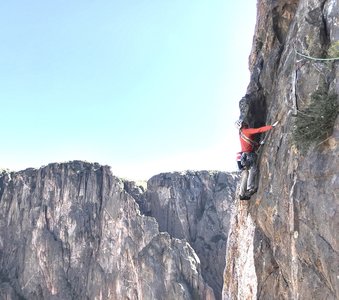 Tyler tiptoeing across loose flakes on the uppe… 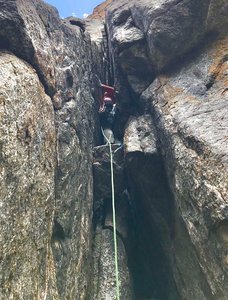 Tyler taking a last rest before heading up the… 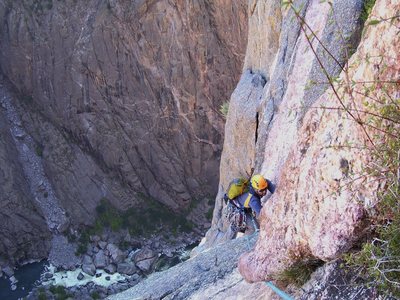 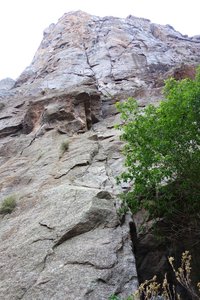 Looking up from the base of the route. Pitch 1… 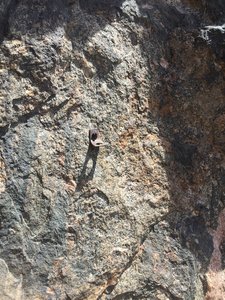 The original bolt on pitch 3. 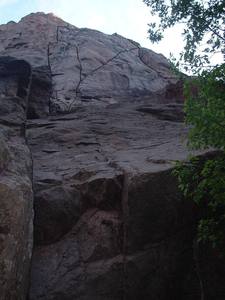 More About The Cruise