Due to floods, this area was unfortunately closed in 2014

To reach this climb, park at the Buick rocks/Hitler's sex life area. Scramble east to the base of the southern Buick rock. This route climbs the main crack system of the front of the rock. To the left of a fairly blank face find a left facing corner. Climb 20 feet to a ledge on some loose rock. Once there squeeze up a right angling off width for 25 feet to a small sloping ledge. Use a few face holds to get back into the now right facing corner. Watch for loose rock here. Climb directly toward the summit up the shallow crack or veer left for some harder to protect face climbing. Avoid climbing directly to the summit, which consists of two large blocks leaning against each other. Instead belay in the space underneath them. To descend, scramble east up 4th class rocks and then south to a descent gully. This route is not run out and has several good stances for rests, but be careful of a few spots of loose rock.

You'll need medium to small cams and a rack of nuts for the route. There are lots of opportunities for large cams for a top anchor. Really, this route will eat most pro. 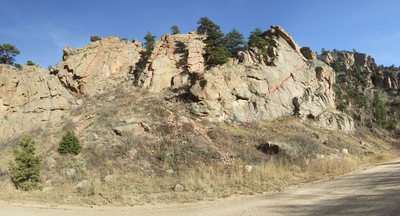 Some of the more popular routes @ Buick Rocks…