5.9 route is simply named after the grade it was given. Go figure.

Scramble around the south face of Parachute Rock to the southeast face to where you would squeeze between a giant boulder and the main rock to get into the little hollow/alcove that makes up the start of several of Parachutes best climbs. Before entering the chute to get to the alcove look up and to the left. 5.9 Route goes up from there over the lip of the corner and onto the main rock. The climb is between 'The Caped One' and the corner where the main rock drops off.

Start with a move that gets you up and over the corner onto good footing. Once there you can protect well all the way to the top. The hardest part of the route is the first move and then it tapers off into a nice hand/finger crack with good footing in the 5.8 to 5.7 range.

At the top of the route, you can set up a good toprope for climbing the harder routes in the alcove.

Pro is standard South Platte rack up to #2 Camalots. 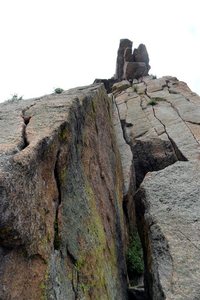 The crux move is at the start of the route -- g… 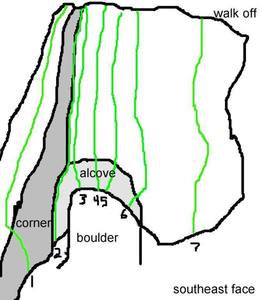