This is one of the cleanest and nicest scrambling routes on Saddle Rock. It also provides you with some awesome views of the Indian Peaks and Long's in the distance.

Hike in as described on West Face route, but continue heading north until you reach the NW corner of the north summit.

A huge free standing mini-Chamonix-like spire marks the spot. Head up the blocky gully picking up the line that suits you best. A some point traverse right out of the gully and head up to a large ledge below a vertical headwall. From here, you can pick from many lines towards the summit. The further left you go the harder the moves.

Once past the headwall, head up the now easy ridge towards the summit.

Descend as described on the West Face route.

Standard rack although this is a great solo scramble. 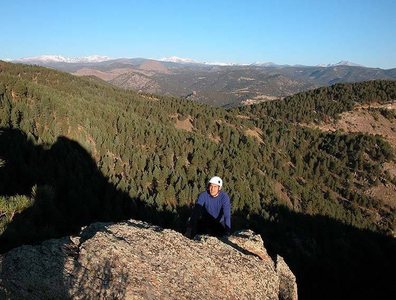 Warren above the headwall on the North Ridge of…