Routes in West Ridge - part A - Verschneidung to base

This route begins just left of The Initial Route, but is best started in a different way. Instead of going up under the amphitheater onto the main ledge, continue to walk up the West Ridge Trail keeping an eye on the left-hand edge of the Allosaur wall. Just before you find yourself just around the corner to the West, you will be able to look up and see a big, rough overhang of dark, gritty stone, about 40 feet above you. The Initial Hangover is the gash that splits the roof. The rock here is more solid than it looks, save for a few chips of rock which will be at your feet getting started. Rack up near the trail and scramble up and right on the low angle rock to just below the gash. The scramble is 3rd class with a few 5.3(?) moves.

P1: 5.10, 50' Set a belay by slinging the huge horn just south of the start with a cordalette. Set some protection overhead and cruise (bruise?) up through the overhang to jugs up above. Merge with a corner system as on The Initial Route. Finish this pitch just below another big roof with a flaring squeeze-slot through it. Belay below this or continue climbing up it.

There are multiple options for descent, as listed for Allosaur. Perhaps the best option to take if you've left packs up on the Amphitheater ledge is to scramble east, then South around the back side to arrive at the Rap anchors above the amphitheater roof. Rap a single rope to the ground. A 50m cord should reach, but I've only tried 60-70m, so I am not 100% sure.

A standard Rack with one set of stoppers & one set cams with optional #4. The crux can be well protected, but once above it, the moves are still hard, the ledge is still close, and placing gear is awkward. Be careful. 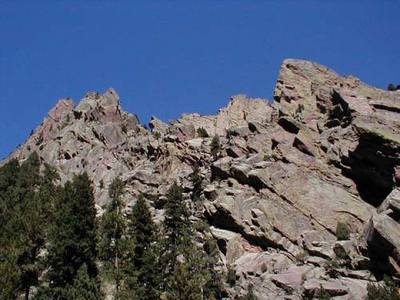 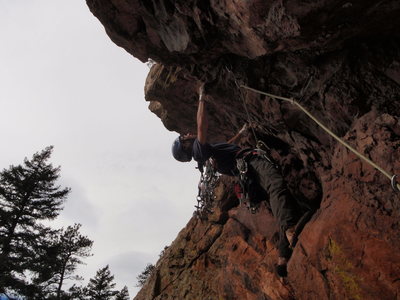 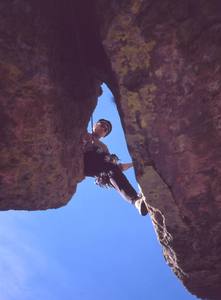 Tony Bubb looks down through 4 meters of hard e… 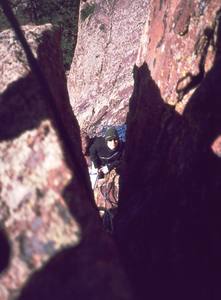 Joseffa Meir ponders her fate as she looks up t… 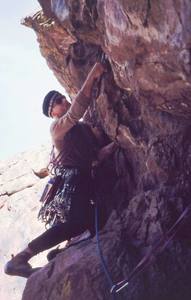 Tony Bubb places a piece before getting into th…