This obscure route is nestled in between two classic routes. It aims for the obvious cat scratch chimneys that make the Fifth so distinctive.

Start the climb somewhere below the chimneys. This point is some 20 yards past a chockstone that blocks easy access from the North. It may be easier to approach this route as if for East Face South route and walk down Northward following the base of the rock.

The official start follows a fairly well defined rib for some 300+ feet to the base of the scratches. This is supposed to be 5.0-5.2. We must have gone off route cause we wound in 5.4 territory and promptly roped up. Belays are hard to come by so judge your opportunities wisely....

The base of the cracks is a broken area that runs in an upward diagonal from South to North.

There are four distinct chimney/gullies. Rossiter says the furthest right is the least objectionable. All of them have a healthy crop of fern growing in them. Due to the relative low angle the chimneys are more like gullies. This almost looks like a canyoneering experience. The second from right to left sported some rather large areas of bird droppings....

As a cleaner option, you can follow the East face just right of the rightmost chimney. This eventually leads you to the arete and the summit. Belaying from a small tree right and above the base of the right chimney, we reached the summit with a 60m rope in one pitch having to simulclimb only 30 feet.

Descent: rap down to the north or do the secret downclimb (see other descriptions).

Standard rack, large pieces might come in handy in the chimney/gullies. 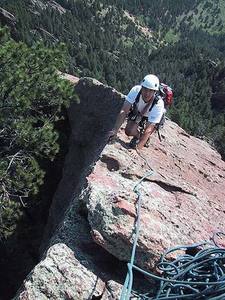 The classic final exposed moves to the summit o… 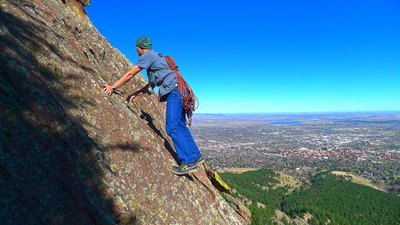 On the lower portion of Cat Scratches. 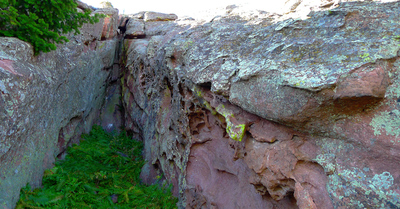 Looking up the second crack from the right. 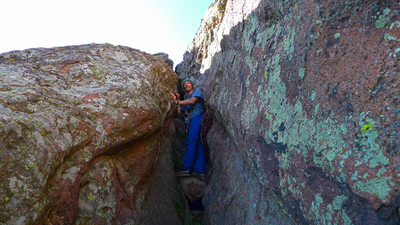 Near the bottom of the right scratch. 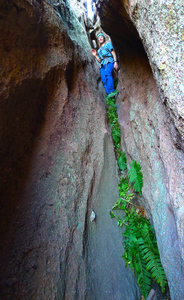 Inside the rightmost scratch. 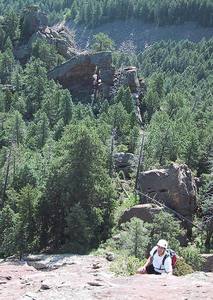 Looking down a couple pitches up the Fifth, wit… 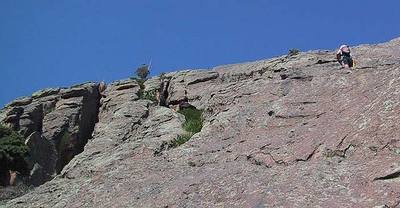 Looing up the middle section of the route showi… 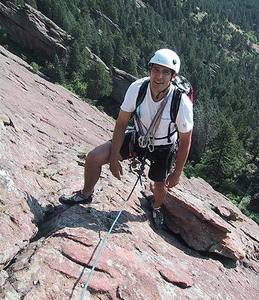 Warren begins to feel the baking heat on the Ca…