This gem of a snow couloir winds its way up the secluded West face of North Arapaho Peak (13,502'). Climb this route early in the spring during a good snow year as the upper section of the route melts out and reveals an unpleasant, steep scree field. You might be accessing this climb from a busy trailhead, but you leave the crowds behind once you cross onto the western face of the Arapahoes.

It is a long way to the North Star, 8 miles round trip from the Fourth of July trailhead, so a high bivy might make sense to ensure you arrive at the couloir when it is still firm and stable. However, due to the northwesterly exposure and the deep inset of the couloir, the route remains in the shade most of the morning. An ice axe and crampons are recommended to prevent a high speed, pinball descent down the rock lined walls of this twisting couloir. Expect steep sections to approach 45 degrees, especially near the top, depending on the year.

Start from the Fourth of July trailhead and follow the directions as if you were going to climb the Skywalker Couloir on the South Face. Once below Skywalker Couloir, follow the drainage north to a col between South Arapahoe Peak and Quarter-to-Five Peak. Descend the other side to about 11,400' and contour under the spectacular west face of South Arapahoe and North Arapahoe. Look for the hidden entrance to the couloir on the north side of the west face of North Arapahoe. You've gone to far if rock cliffs of the face turn to the south and bar further contouring. You can identify the North Star, because it jogs left behind the rock walls past the entrance.

Once you're in the couloir, you'll wind up the face loosing sight of the bottom and top on a sinuous journey to a notch at 13,200'. The upper section of the route is exposed to harsh winds and is often scoured, expect some steep climbing up loose scree to the notch. The views from the notch are breathtaking with the North Face dropping steeply below on the other side and the backside of the Brainard Lake complex looming across the gorge. To the north is Long's Peak dominating its domain, and to the south and west miles and miles of white capped mountains. A short scramble up moderate gullies leads to the huge North Arapahoe cairn. Descend your ascent route (recommended on skis or snowboard) or complete a loop to South Arapahoe along the South Ridge route and descend the Southeast Ridge to the Fourth of July trail. 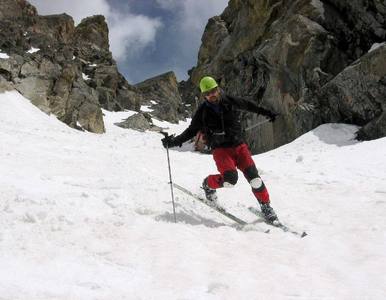 Crankin' teles down the couloir. 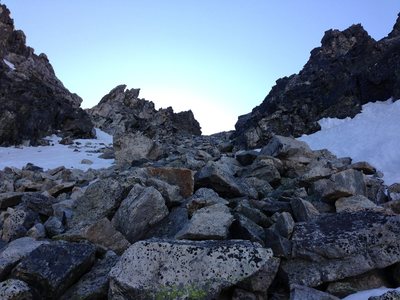 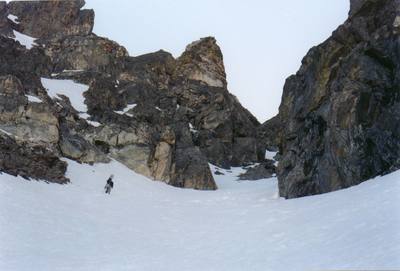 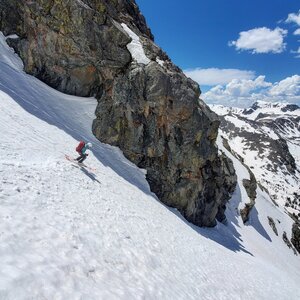 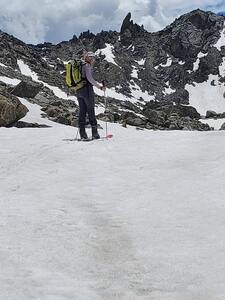 Heading back up the pass. 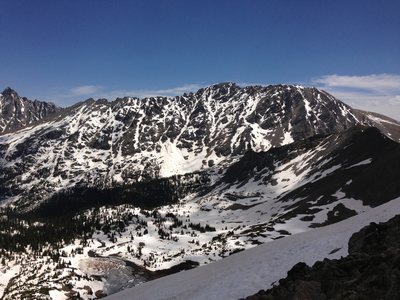 Climbed Mt. Neva to look at the North Star rout… 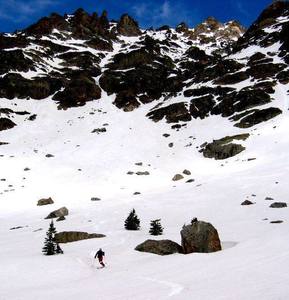 The Northstar couloir is mostly hidden in this… 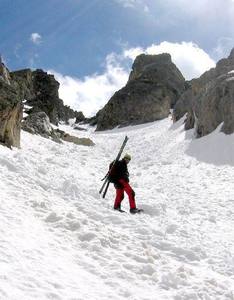 Climbing the middle of the couloir. 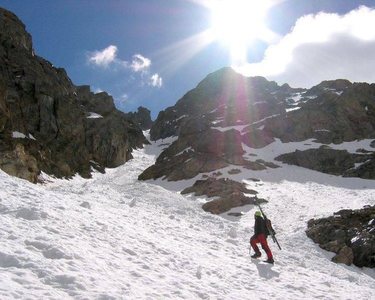 Climbing up the couloir, this is near the start… 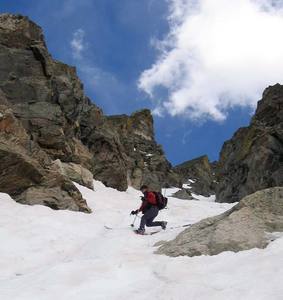 Skiing steep crud in the middle. 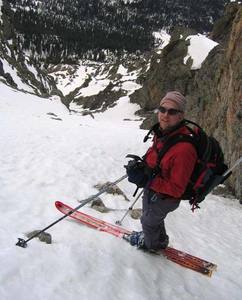 Looking down from near the top of the couloir. 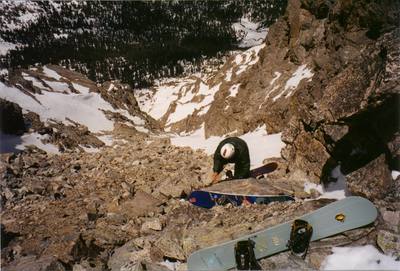 Where the snow turns to scree...yup, it is kind…