Routes in The Catacomb

Per Kurtz: The Monastery is open again! fs.usda.gov/Internet/FSE_DO….

Per Julie Nelson: the forest is closed due to after fire concerns in this area until June 30, 2021. There is a sign at the trailhead about the closure. See the US Forest Service website for further updates.

Previously: per Bruce Hildenbrand: Storm Mountain Road is open to all.

Per Hank C: the Storm Mt./Cedar Park area is closed to locals-only traffic for the time being due to wildfire concerns. We were turned away by a park ranger this morning (9/12/2020).

Originally reported as "Right Sunny Niner (5.9)" in the R&I 80 (8/97) mini-guide, this short romp appears as a 5.7 in the 2001 Bernard Gillett guide. Whichever, the quality of the route is no less diminished and you'll find wonderfully varied rock along its four bolt course.

Gravestone can be found on the West side of the Catacomb (right side when descending the Catacomb trail), about half way down the Sepulcher Formation. The start can be identified by a large flake standing in front of the Sepulcher which appears as a wide tombstone when viewed from above.

The start begins behind this flake, then climb up easy shelves to the first bolt, and follow 3 bolts of crystal pinching and Needles-like knob grabbing. The anchor is off to the left above the steep climbing, a two bolt affair shared with The Mausoleum. Rap 40' to the ground.

4 bolts to a two bolt anchor. 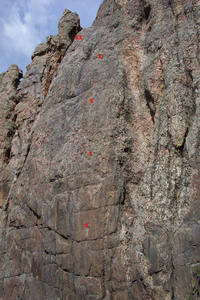