Total Abandon is a stellar route in an awesome setting. It is the gully/chimney system that is located on the right side of the Corinthian Column on Pike's Peak's north face. With deluxe access from the Hero Rock Traverse, what more could you ask for? OK. How about 300 to 1000 feet of mixed climbing?

From 13,000 feet on the troll road (yuck, I hate paying trolls), park at the last major curve before the road heads up to the summit. Cross the road and head east until you can drop off into the void. Traverse south along the Hero Rock Traverse. This will involve mainly dropping elevation at first and then traversing. Allow at least an hour if you are unfamiliar with the traverse.

Locate the chimney system on the right hand side of the Corinthian Column. This is a giant buttress of rock on the Hero Rock Traverse. Work up into the chimney system. The crux is going to be the second or third pitch and involves a steep, thin wall of ice with a mixed move at the top. Continue up the gully to the summit or bail off to the right and descend to your car.

This route is probably in condition most of the year. Watch out for death avalanche potential in the spring and thin conditions in the fall. The gate at the bottom of the mountain is the most problematic issue. Based on current gate opening times, it seems as if early May or late September would be best for an attempt. Remember, you can always walk up from Manitou Springs. Use Rock and Ice #85 for a reference.

This is a stellar route in an awesome setting. Enjoy.

[Eds. This submission had been listed under RMNP/Alpine then non-RMNP/Alpine and now here by request & for better organization.]

You might need a little bit of everything for this one. A few knife blades and Lost Arrows would be nice. Bring some bigger passive pro as well. Camming units suck in icy cracks. A couple of shorter ice screws (mids and stubbies) will round out the rack nicely. 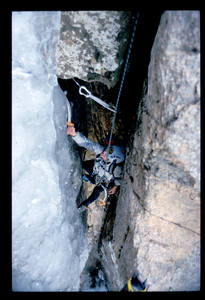 The crux of the second pitch. 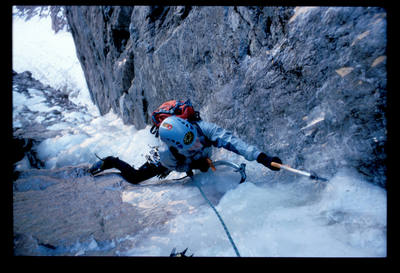 Scrappy crux of the first pitch in pretty fat f… 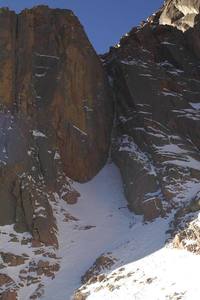 The Corinthian Column is on the left. 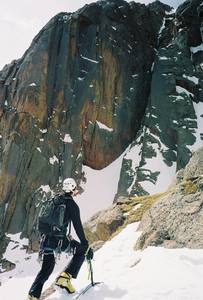 The upper part of the route can be seen here as… 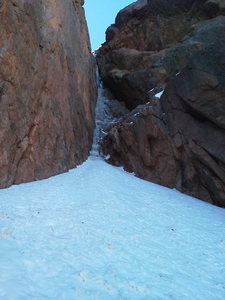 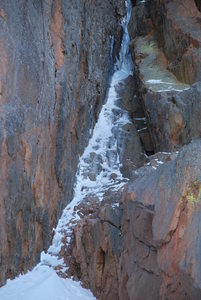 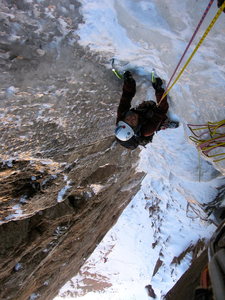 Caught this is killer shape WI4+ M3+ We did ma… 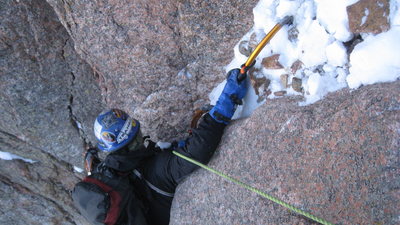 Thomas mixing his way through the rubble top-ou… 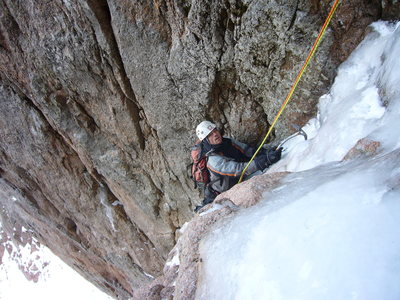 Slade coming up the first pitch of Total Abando… 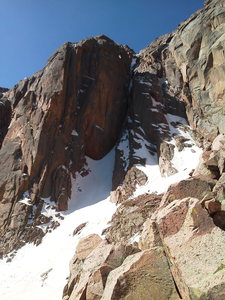 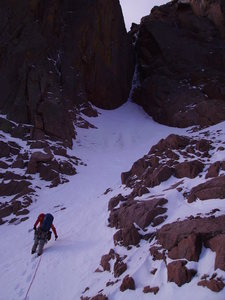 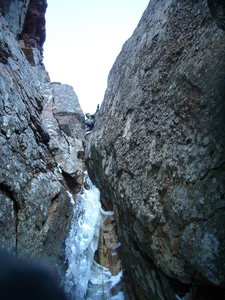 Finishing up the 1st crux of the second pitch.