Routes in West Ridge - part B - Long John to Verschneidung

This route is a variation of the route "Shock of the New" which climbs the obvious arete just to the right side of the famous route "The Unsaid." This is located in the "Unsaid Area" of the West Ridge of Eldorado Canyon. The new route goes "super direct" up the arete, not deviating from the obvious prow. The bottom is clean, but the upper part still has some fine lichen on it.

The original line, from which this name was derived is not quite as obvious or hard and started on the flake system to the right, eventually crossing over to the left and climbing there. To do Aftershock, climb the direct arete until the broken ledge is reached, up above Cruisin' For Burgers and The Unsaid. This is the arete about 8 feet to the climber's right, in the front page picture (attached below). The lower part of the arete is obscured by a tree in the photo. This variation climbs a little over 1/2 of its length on different rock than the original route.

The moves are good, and perhaps a little reachy. A partner of mine who had just lead several 11's and a 12, then made the comment that she could not even perceive a way to do the moves (height may be a factor). I am no giant (I'm 5'10" but have long arms) and I found the moves to be spectacular, but difficult and insecure.

If you attempt to lead this route and are not injured, you will still probably wet the bed every night for a few weeks. TR it from the gear above The Unsaid. The TR from The Unsaid anchors could produce a [violent] swing if you were to fall from the top of Aftershock, but if you executed the moves down low, I seriously doubt you will be falling up high.

Hordes of climbers may be in this vicinity, climbing the more popular lines, including: Unsaid, Cruising for Burgers, Break on Through, Strawberry Shortcut, Sunshine Wall, and Washington Irving. I have never seen another climber attempt Aftershock or Shock Of The New.

This route would be a serious lead for any climber. The gear is nearly nonexistent and the moves are difficult and insecure. I do not know how one could safely lead this route, but it can be toproped with only minor swing-potential. I TR'd it and I seriously recommend that anyone else do the same, although it might make a good headpoint. 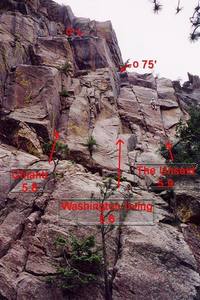 Eds. Note, this rappel may be a rope stretcher…