Routes in The Arsenal

Q: When does a three-star route become a zero-star route?

A: When it falls down, of course.

Once Rifle's most sought-after 12d, Vitamin H is now a cobweb-collecting pile thanks to the bottom half of the route, which fell off in the spring of '98. Formerly, the route was one of the funnest, steepest jug hauls around, with great big blocky holds and a crux roof-to-headwall that was the site of many an air voyage.

When this huge plaque of rock cut, it took with it the starts of routes from Rendez-spew all the way over to Dope Party, yet Vitamin H was the most affected, losing just about all its holds through the bottom section.

The route still goes free at 13a (a hideous knee-bar sequence to get over the snot-yellow roof left behind by the collapse) and has been re-bolted, but is very nasty.

A better bet is to climb Vitamin D (12d): Start on Debaser and traverse left over the small roof band onto the top half of Vitamin H. It is plenty pumpy and plenty fun.

If you look through the talus at the base of the wall, you can still see the chalk and boot grease on the rock that cut. Interestingly enough, this huge plaque of rock seemed comparatively solid relative to other "dubious" features on other Rifle routes.

There's a lesson in here somewhere.

1-2 quickdraws. The route is fixed with chain draws. 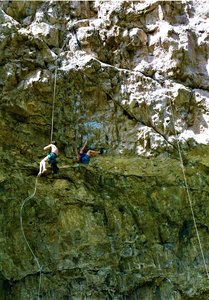