This moderate alpine rock route is classic both for the quality of the climbing and the sheer ambiance of the wall it tackles. The long approach to Lone Eagle Peak ensures solitude, and the cirque itself is unmatched for beauty in the entirety of the Indian Peaks.

Despite the moniker, most of the climbing takes place on the east side of the peak. Scramble southeast up a steep grassy slope for 200 yards from Crater Lake to the base of the east face. The route starts from the talus field just over the crest -- look for a large, tree-filled bench.

P1. Climb wet black rock (5.4) past a pin, aiming between the two large trees on the bench.

P2-4. Follow a 5.0 ramp up and south (climber's left), climbing over, around and through numerous trees en route. You can break this bit up or simul-climb. It's mostly 3rd and 4th class. It helped me to scope this bit out from the valley below and to the east of the peak, since only the final pitches are visible from Crater Lake.

P5. The ramp ends at a grassy gully which splits the east face. Climb broken rock (5.3) straight up this cleft to the base of a deep, water-streaked chimney.

P6. Climb the chimney (5.5), making use of the positive face holds on the right wall to get past a few tricky spots.

P7-8. Grassy slopes interspersed with occasional rock steps (5.4) lead to the top of the cleft, which deposits you on a huge ledge system below the summit cliffs.

P10. The crux! This 150-foot pitch follows a pair of twin cracks on the northwest-facing summit headwall, about 100 feet west of the prominent arete where the east and north faces meet. You will most likely need to move right and down from your last belay to reach the start of cracks. Don't be suckered into trying the diagonalling twin cracks closer to the arete -- it's off route. You'll know you're on route if you pass 4 old pins. Move right from the top of the cracks past a spike. Belay above on a huge ledge.

P11. Move your belay about 100 feet south (left) along the ledge to the base of a left-angling 5.4 corner/chimney. With a 60 meter cord you can reach the top of the peak in one pitch from here. When the chimney peters out, either belay or continue wandering up broken rock (choose your own adventure) to the summit.

P11 Alternate. Take the striking hand crack up the center of the northeast face at 5.8. It takes solid pro with finger and hand jamming to a great ledge just below the summit. Optionally belay here, or finish off the summit if you have a 60m.

A light rack should suffice for this route. Bring 1 set of stoppers, some mid-range TCUs, Camalots to #3 (doubles in #1 and 2), and plenty of long slings.

Descend the Solo Flight route (Class IV), which heads south along and near the summit ridge before dropping east to Triangle Lake.

Review the descent trail on this map!

Before you start, scope it out. You can see a large gully to the southeast that looks tempting. Do NOT take this! You are aiming for the notch up to right of the top of that gully, which is higher than you are standing now, and farther than that gully. You will go through that notch and down the other side, which you cannot see from the summit. Most people will stay roped up all the way through to the notch.

From the summit, walk south on the summit "sidewalk" about 50 feet to where it peters out. This will not look like a good idea from the summit. Climb down easy blocks to the east (left). Head down and south following many good cairns. You will eventually reach a large ledge that goes hundreds of meters on fairly flat and easy ground, passing by some large boulders on the way.

When you reach the couloir below the notch, climb up low 5th Class terrain on extremely loose, rubbly crap to the notch. Place pro in the sides of the gully on your way, and try not to shower too much rock on your partner!

Once through the notch, the challenges end. Follow cairns as best you can, heading for triangle lake far below. There are many cliffs to avoid, but the many paths will work and it's not hard to avoid them.

Once you get near the lake, contour around to the left until you hit the meadow below. Follow the left side of the meadow (probably using the rock bench to stay out of the bog) back to the trail. 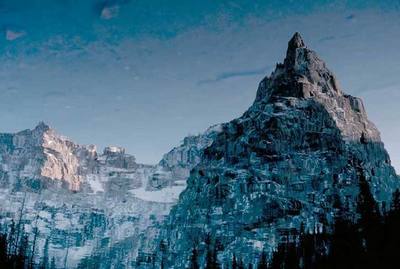 This is an undoctored photo of Lone Eagle from… 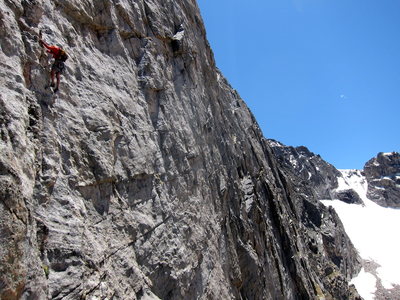 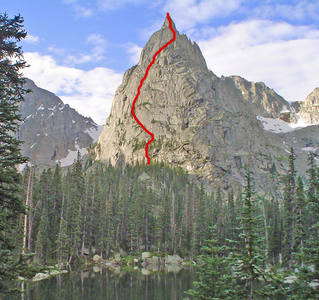 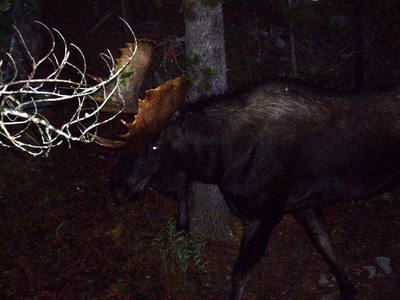 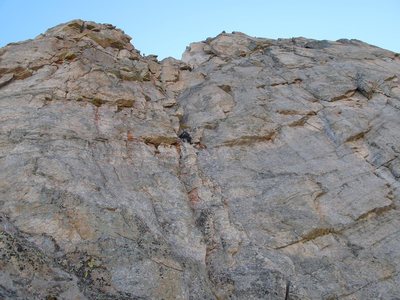 A climber about half way up the crux pitch on S… 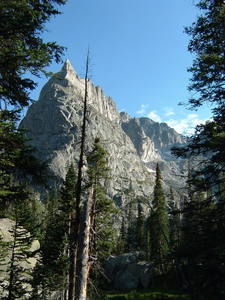 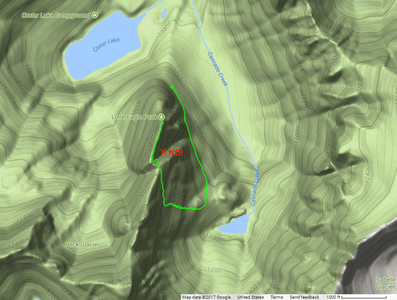 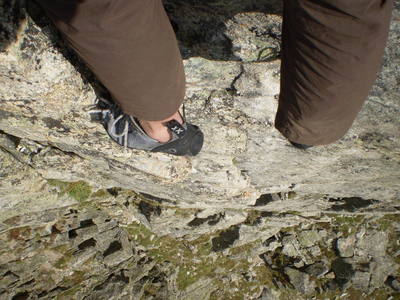 Looking down the 5.7 pitch. 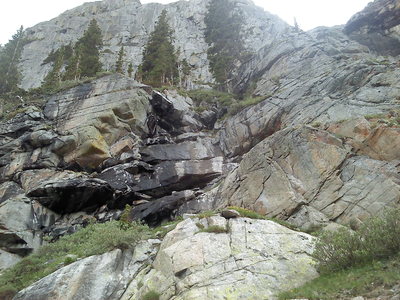 The start of the route. I found it not all tha… 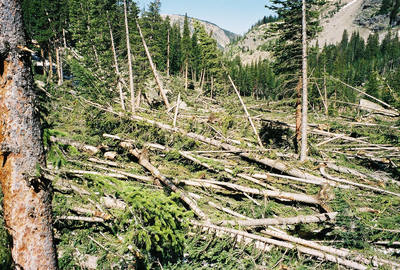 Avalanched trees on what's left of the trail fr… 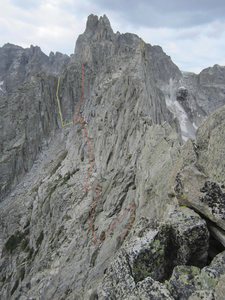 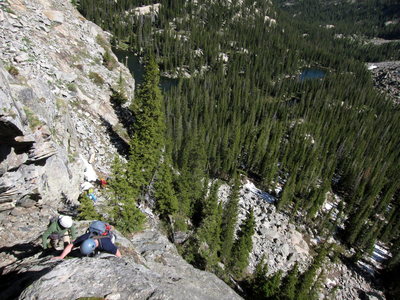