The Rainbow Wall starts on the bright yellow South face of the Wind Tower by scrambling up the third class ramp to the right of King's X. A good Friend can be placed before reaching out to clip a bolt that initiates the hand traverse. The traverse is bolt protected and largely on a rather decent edge, it's the foot work that is so tricky. A hard move on very crimpy edges leads into the traverse which is followed by several reasonable moves. A pseudo-rest arises just before the edge system turns vertical and turns very difficult and cruxy. An ancient beta-max, and origin of the term beta, was published in Rock and Ice and shows Bob Horan running through this sequence. I tried the Rainbow Wall several years ago with the beta-max at hand and on top rope and vowed to get back when I thought I had the finger strength. The hard climbing is near the end of the traverse and is indeed rather brief, however, my guess is that the Rainbow Wall will still hold its grade 17 years later and as such makes a terrific first 5.13 lead. The grade seems reasonable, the holds are largely very friendly, and the protection is as safe as you can get, at least in the traverse. After turning the corner on the left work carefully up to the ledge system below the Metamorphosis from which you can rap. With care you can get some stoppers in here. While it is not a big route, the Rainbow Wall is surely an Eldorado classic, and perhaps its turning up today will give just the impetus to get back on it.

Bring six or seven draws, a few small Friends, and perhaps some wired stoppers. A 50m rope gets you down. 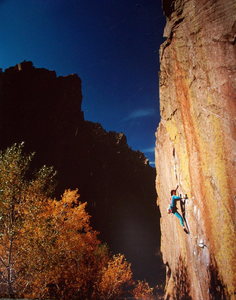 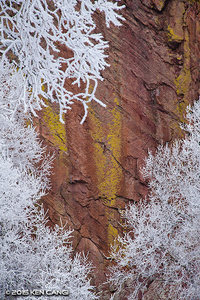 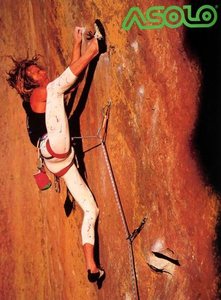 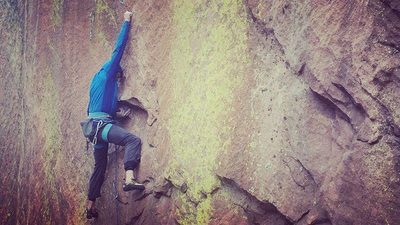 Alec Hull about to begin the crux section on an…