Begin the approach at the Bear Lake parking Lot. Go around Bear Lake counter-clockwise a short ways until the Fern Lake trail angles off to the right. Watch for several trail junctions. Each one is well signed. Just follow directions for Fern Lake. At 2.8 miles from Bear Lake, the trail reaches a saddle between Joe Mills Mountain and Notchtop Mountain. Look for a very obvious trail to the left that descends to Lake Helene. There is no sign for this trail, but it is easy enough to stumble across. Work counter-clockwise around Lake Helene. At the end of the lake, follow the trail uphill. The trail is braided, but keep an eye out for the path that is most well used. Eventually, the path works its way up through a gully. The upper part of this gully can contain a small snow patch until mid-summer. Always keep an eye out for cairns and the best path as it goes over a series of rock humps to reach a small lake at the base of Notchtop's south ridge at 0.7 miles from Lake Helene.

With Notchtop's south ridge soaring above, work across the bottom of the lake and uphill to the left, through mild talus and grassy slopes. After entering the gully, look for a ramp going up to the right that would lead back to the south ridge. It should look very easy and is in a small cirque with large boulders at its base. An easy scramble leads to a nice perch on the ridge crest. This makes a nice place to rope up and/or put on climbing shoes.

With a two hundred foot rope, two pitches can be made of a series of rock steps in the ridge. These steps are separated by low angle spots that can be used as alternate belays with a shorter rope. Many different paths are obvious on the initial pitches. Look for a cool line and enjoy. Eventually find a belay beneath the south ridge as it increasingly steepens above. A grassy ledge leads right around a spectacular corner. It is never very difficult and is nicely protected for both the leader and the second. Stretch the rope out to a belay beneath the east meadow.

The "notch" should be visible above you. Follow the path of least resistance for a rambling pitch up the east meadow. Find a belay beneath a steep headwall that blocks access to the notch. Look for the easiest path path through the headwall. It should be a crack on the left that is well protected. It goes up to a small roof, where a step to the left leads to easy terrain. This is one of the best pitches on the route.

After descending the spire, work uphill to the north. The goal is to find the West Gully, a third class gully, full of yucky talus, that descends to the lake at the base of the route. Look for some cairns and and a well worn path. Several rap stations appear, but the cliffs below are long, and the trail goes right beneath them anyway. The scramble from the notch to the West Gully is longer and more intricate than would be expected. Don't worry, just look carefully for the path everybody else has used before. Some snow may be in the upper part of the West Gully until mid-summer. This traverse is not a good place to be caught in a big electrical storm. Maybe that's why there are several rap stations encountered along the traverse.

Descend the West Gully down to the start of the route. This is the traverse from the gully to the ridge line. Pick-up any stashed gear or head directly down to the Lake. Reverse the approach to Lake Helene and Bear Lake via the Fern Lake trail. 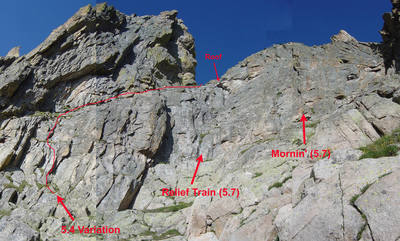 Three options above the East Meadow (we did the… 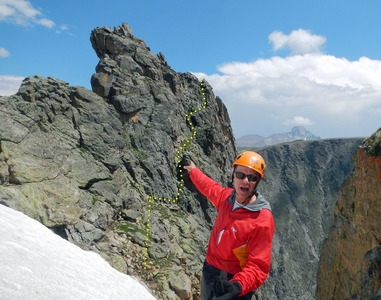 Descent route on northwest side of Notchtop. Ca… 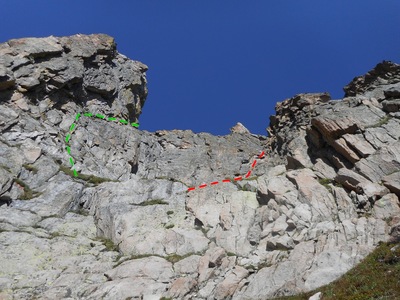 The notch, as seen from the grassy ledge below.… 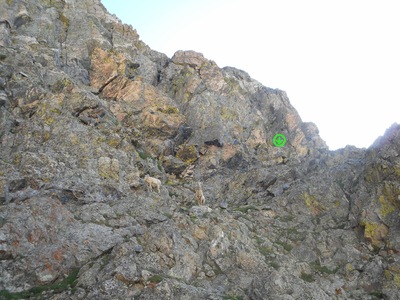 The start of the Spiral Route. The two sheep ga… 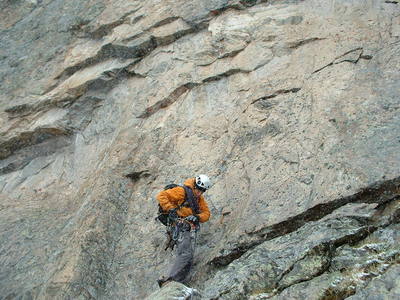 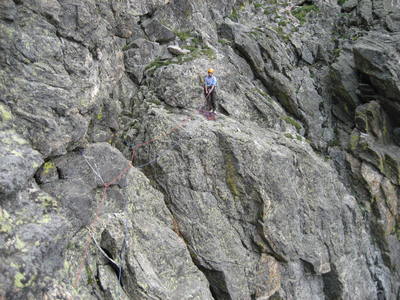 Molly on the descent. I think this is where man… 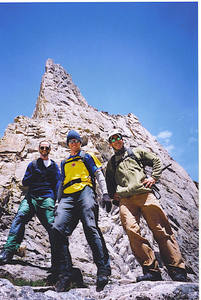 The crew at the base of Notchtop. 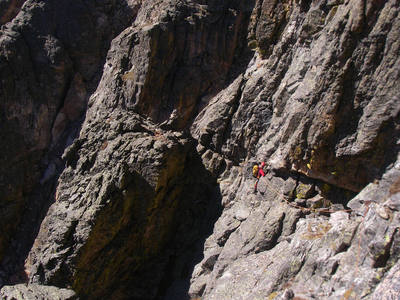 Traversing off the west side of Notchtop. Paul… 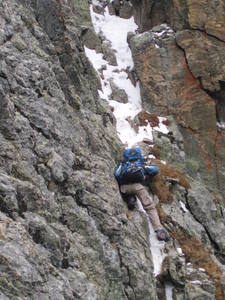 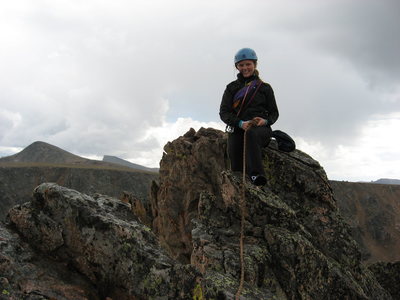 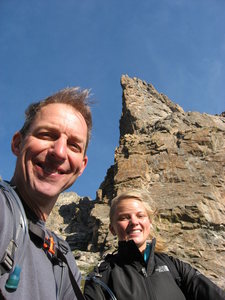 Jim and daughter Grace with the Spiral Route be… 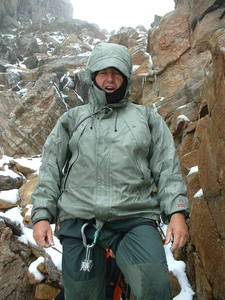 Craig Blankenship taken by Kevin Lorda in the d…