Routes in Rock Of Ages

This route is on the Rock of Ages, the first of the cliffs mentioned in the Fern Canyon intro. It is one of the best shorter routes I've ever done, with clean, splitter cracks from fingers to hands and also some wild 5.10 moves to access these cracks. A classic with character. The pro is generally great on the harder climbing, except for the first pitch, but the route still feels burly for 5.10!

Hike a mile from the Fern Lake trailhead to the Arch Rocks-- massive boulders, right on the trail, which have tumbled from the cliff. (There is some really good bouldering in this area). From there, the cliff should be visible-- a clean, hanging 200 foot slab which sweeps to vertical and is laced with cracks. It faces slightly SW. Scramble up through talus and thickets to the left side of the cliff where a large boulder forms a chimney with the main wall below a long overhang.

P1 - belay from the top of the large boulder which offers easy access to the overhang. Stand on a horizontal spike of rock, and turn the roof on jugs (5.10a, a bit committing) to a good rest. Continue up a funky 5.9 groove, and belay on a small ledge above it, if you have the right gear. If not, traverse left to a semi-hanging belay at a piton and horn that can be slung, 80'.

P2 - head straight up (or back right) up seams, and climb into a flake system which angles up and left. When a good finger crack appears to the left, place a bomber TCU, and make a wild move, getting almost horizontal, over a blank wall to gain the crack. Climb up that for 20 strenuous, exposed feet to an incredible belay perch right on the edge of the cliff (5.10c), 70'. (Note: if bad weather comes in, you can rap from here straight to the ground, which slopes up below the left side of the cliff, with a single 60 meter rope, but you'll have to leave gear.)

P3 - head up the splitter right-slanting crack, reaching the top (5.10d), 50'. Pitches 2 and 3 can be combined into an incredible lead with numerous varied 5.10 cruxes, though the belay atop P2 is worth savoring, and if both partners want an awesome crux lead, it makes sense to break things up. Also, the belay below pitch 2 can be quite uncomfortable, while the belay below pitch 3 is a great stance.

Descent: scramble carefully off to the east, or traverse west (most will want a rope) to a rap anchor above a mixed climb (Heavenly Daze) to the left. A 60m suffices for this rap with some downclimbing, and a 70m would be comfortable. 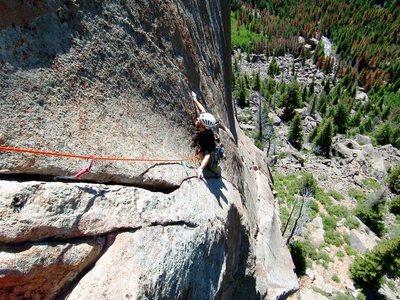 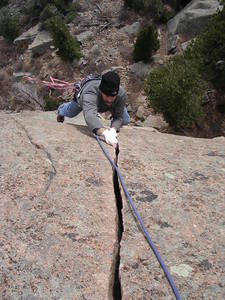 The crux from above. 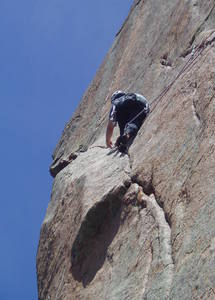 If you walk the finger crack, it's not at all s… 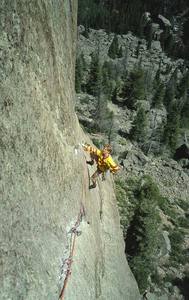 Gary Ryan on Days of Heaven. 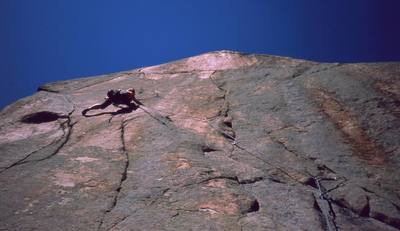 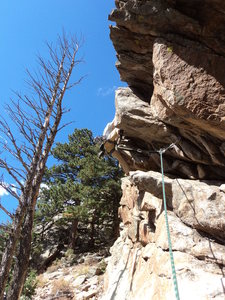 Gordon on the left start for P1. The jugs are… 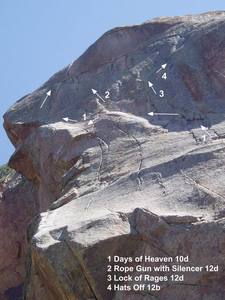 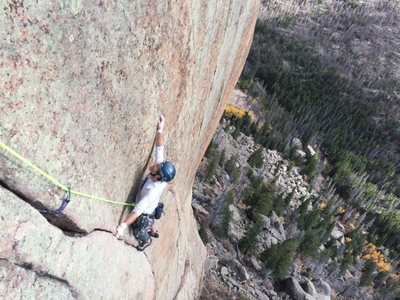 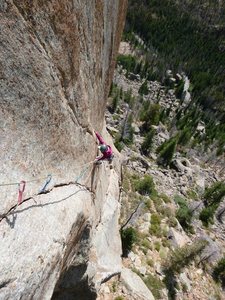 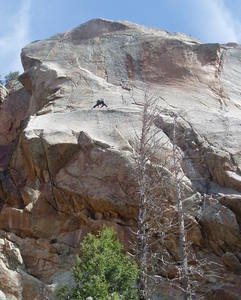 At the P1 belay. P1 climbs the roof at the slot… 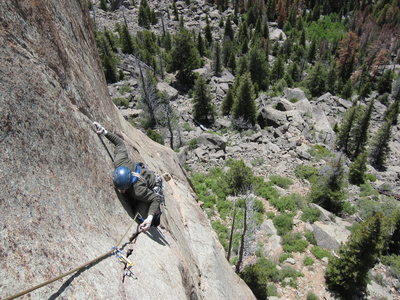 Looking down at P2. Photo by Jeff G. 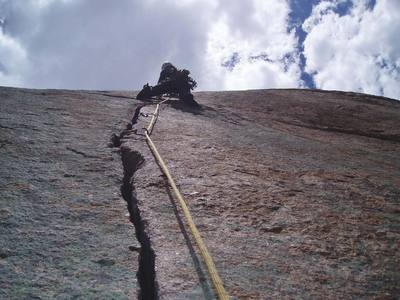 At the start of the hard part of pitch 3: wide…

More About Days of Heaven