Access Issue: Trails are closed from sunset to 6:00 am. Details

Trails close at sunset. Give yourself enough time to be back at your vehicle (or campsite if you're staying at one) before dark, or the rangers will fine you.

This route will constantly annoy you with bizarre, basackwards moves and other things that hadn't occurred to further your climbing move arsenal since you were five. However, you might want to remember some of the resulting moves. This is the right bolted route on the Lower Muffins. It moves up the left side of the lowest rightside rock up to a bolted section of balance switching moves.

If you're going to lead this route, you should either stick clip the first bolt or keep a crashpad handy as the bolt is over a tough first move 10' off the ground. This move found me running off the climb on lead and getting caught by my belayer as I was running downhill 10 feet later. Avoid the temptation to start from the right, as it will probably lead you nowhere.

Three bolts to a 2 bolt top anchor. A crashpad or a stick clip will be useful up to the first bolt. 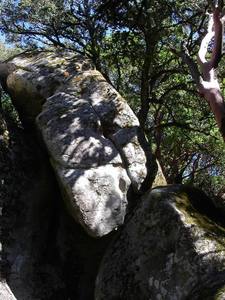 This is most of the route. The first three fee…