Twentyfive years ago there were two challenging problems up the bulge to the left of the finishing scoop of "Nat's Traverse" - "Pinky Paralysis" and "Pinky Direct". They were named for the effects created by vigorously pinching a fist size chunk of stone pasted under the upper bulge. After a year or two of effort during my undergraduate daze in Berkeley, I mastered these problems, then proceeded to run laps and sandbag my colleagues with them. During one such session, I demonstrated "Pinky Direct" for the crew, then stood back and admired the struggle. Taking sympathy on their plight, I then proceeded to demonstrate the easier "Pinky Paralysis". With body torqued horizontal, feet level with shoulders, reaching over the top, the famous pinky hold snapped and I rocketed off backwards. With lightning fast, cat-like reflexes I did a quick half spin and landed on hands and knees. Unfortunately, I caught the heel of my hand just long enough to shatter the ends of both bones in my forearm. So much for climbing El Cap over spring break.

Someone collected the chalk-caked hold for a souvenir, for that was all that remained of the "Pinky" problems. Many tried the line in the following months, but absent the hold it defeated all comers. Many months later, after recovery and rehab, I received a letter with a mysterious substance from one of my oldest climbing partners. Whatever it was, it made me feel strong and full of confidence. I ran up the hill, and after a brief warmup on Bench Wall I jumped on the bulge. The problem went down with a new sequence like rain falling from the sky. I tried to repeat it and failed. I failed for seven more months before finally recapturing the magic. The resurrected problem was christend "Red's Revenge".

Beta: Start under the bulge left of the finishing scoop to "Nat's Traverse". Left hand to a sidepull over the bulge. Left foot to a divot on the lip. Gaston the right hand above the left and rock onto the left toe. Left hand to a horizontal edge on the upper bulge. Right hand way up and right to a patch of cheese grater. Match and mantle over the top.

Since this was done before the V-scale, consider the rating a humongous sandbag.

A fat pad and a better spotter than I had. 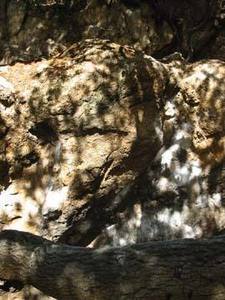