The Chamber of Secrets

Routes in The Rad Cliff

Larry DeAngelo really found a gem when he began developing The Rad Cliff, which lies to the climbers right as he/she is descending from Frogland. The Cadillac Crack is the most obvious climb from the descent and marks the beginning of the cliff.

The Chamber of Secrets can be found by following the cliff to a huge, low-angle, right leaning offwidth/chimney crack. Just to the right of this is the start of the route.

Pitch 1: Head up the gully to the base of the chimney. Ascend the vertical chimney to a nice ledge with good pro. 5.6, 100'

Pitch 2: After a somewhat interesting start (crux), one of the best handcracks in all of Red Rock appears, which is followed until you can step left onto a ledge. Walk 5' left and belay near a tree. 5.7+, 100'

Descent: Downclimb about 5' to a rappel station and rap once with two ropes. This amazing rappel takes you down Larry's testpiece- The Dementor.

A standard rack does well here, a second #2 camalot or equivalent would help for the second pitch. 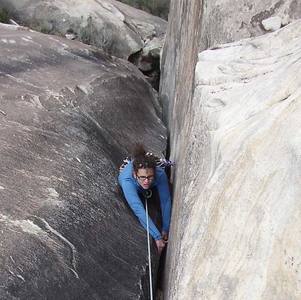 The exit from the clean dihedral on Chamber of… 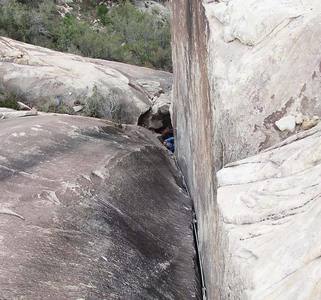 Starting the upper corner on Chamber of Secrets 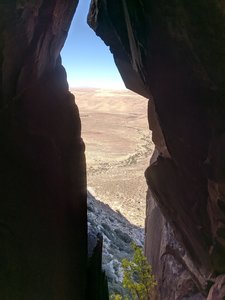 Most of the way up pitch one. 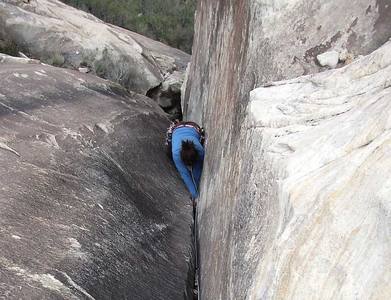 Jamming higher on Chamber of Secrets 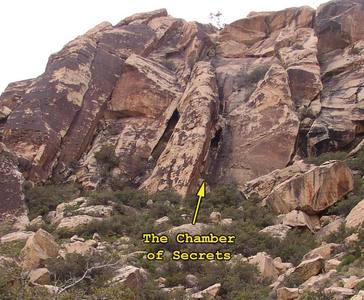 The Chamber of Secrets

More About The Chamber of Secrets