Black Orpheus wanders up the large hindquarters of Solar Slab, culminating in a giant arcing right-facing corner that has by far the best climbing on the route. The route is long, but much of the climbing is easy and a fair bit of it is mediocre. Two stars is generous, but it makes for a pretty fun adventure with a little bit of challenging route-finding and more commitment (due to the wnadering line and lack of fixed anchors) than many long routes in Red Rocks.

Hike past the main face of Solar Slab into the main Oak Creek drainage, continuing until the large and complex wall in the photo below appears. Leave your stuff below 600' of slabs, and scramble up to a long left-facing corner approximately in the middle of the wall, and left of a large flatiron feature. Locate the large RF corner on the upper left portion of the wall; the final 4 pitches follow this corner, and the route starts quite a ways to the right of it before wandering up and over.

Pitches one and two are long 5.8 leads up the corner (bypass the bolted anchors in order to stretch these leads).

P3 is easier and wanders left and then back right at about 5.5.

P4 is very easy fifth class and over 300 feet long; basically, simul-climb while finding the easiest path up and left to the main corner system on the upper wall. Belay in a comfy alcove down and right of a clean V-slot corner.

P5 is the jewel of the route: do exciting face moves up and left past a bolt into the corner, and climb for 150 wonderful feet, passing a cool chimney en route to a good belay ledge below 2 bolts.

P6 climbs past the bolts with a cool, tricky 5.9 move which for some reason has been upgraded to 5.10 in Supertopo. Continue up the cracks above which are are really good. Several belays are possible.

P7 continues up the huge corner with stiff for 5.7 liebacking past a bolt. Where the corner arcs right, traverse the face straight right to a fixed belay.

P8 is one of the wilder 5.5 pitches I've done. Follow a few bolts right and then up on runout, loose, exposed but awesome face climbing. Cut back left through the main corner into a groove that leads to the top.

The descent is fairly involved. We scrambled up to the next ledge (well short of the buttress top), then followed this left (west) and down a ramp with a line of cairns to a new bolted rappel station. You have to downclimb an easy chimney to get to the station. Two double-rope raps got us to a large bowl, which we followed down and skiers' right to a terrace with a large boulder. From here, take the ramp west into the Oak Creek drainage and follow that back to your packs. You can do three raps with a single 60m rope (using a mid station after the first one), but the last one WILL NOT REACH GROUND. With a lot of stretch and a big swing to the left, you can barely reach a 4th class ramp and get off. But you'll probably die. Not recommended.

Another rappel route from the top of the buttress uses several single rope raps to get into the bowl. It may also be possible to traverse across the top of Solar Slab and descend the gully east of that route. 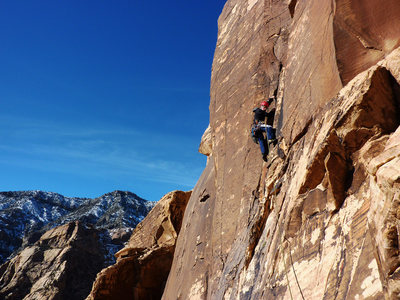 Launching up into the crack and corner of pitch… 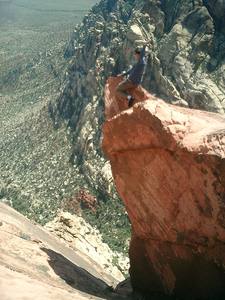 Curt riding the bull on top of Black Orpheus. 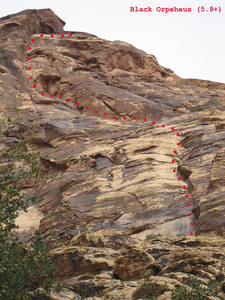 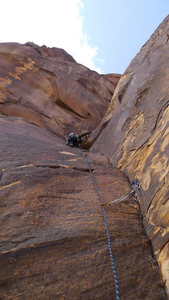 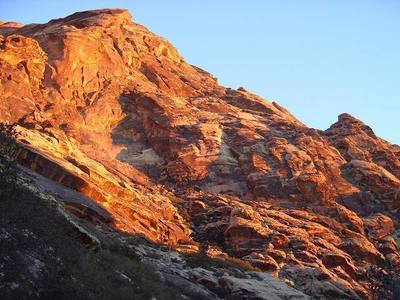 Looking up at Black Orpheus 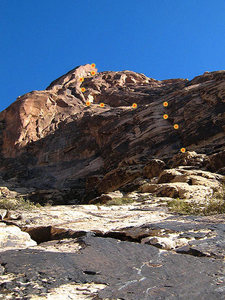 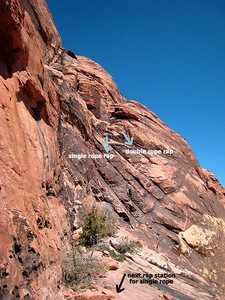 first single and double rope raps on the Chicke… 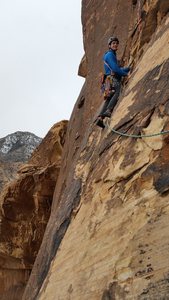 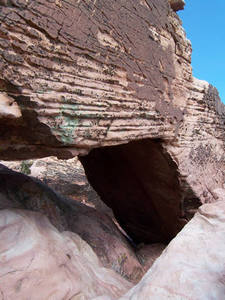 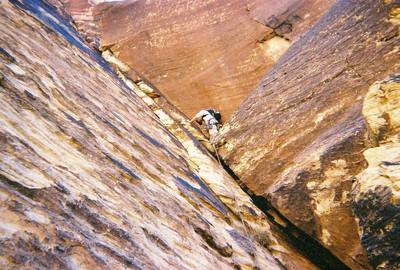 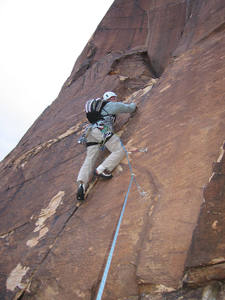 Brett pulls down on the Black Orpheus crux sect… 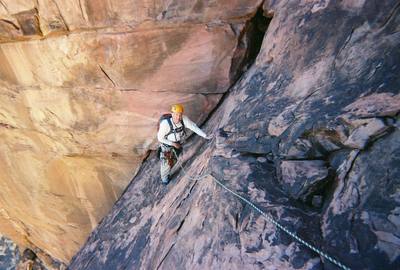 Richard at the massive dihedral. Photo by Xavie…