Routes in The Rad Cliff

At the very base of the Whiskey Peak descent gully, on the south side, is a clean offwidth crack in a right-facing dihedral. Climb the offwidth past a small overhang to an alcove, then chimney and jam a handcrack to a large ledge. Rappel with 2 ropes.

Historical note by Larry DeAngelo: I was researching history for Red Rock Odyssey at the time of Randal Grandstaff's death in 2002. His widow, Laura, graciously allowed me to sift through an entire trunk of slides and photographs that Randal had taken. Among them was a picture of the the striking Cadillac Crack that had been taken in January, 1975. At the time, Randal was at the beginning of what was to become an illustrious climbing career under the tutelage of local master Joe Herbst. In light of Joe and Randal's friendship, and Joe's affinity for wide cracks, it is inconceivable to me that they did not climb this route. The name was given by me, inspired by Randal's Chrysler Crack (this one is a nicer ride!).

Bring the usual rack, plus some large stuff in the six-inch range. Update: recently (2006) a bolt has appeared to protect the crux section of the crack, so really large gear is not actually needed. 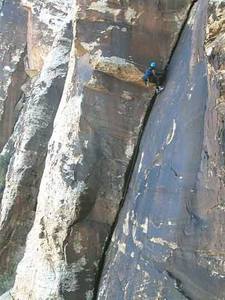 George Urioste climbs past the crux overhang on… 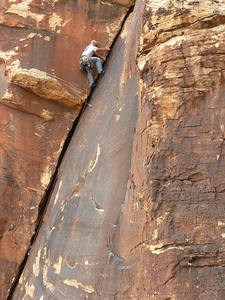 AJ with perfect form cruises the 5.9 crux of Ca… 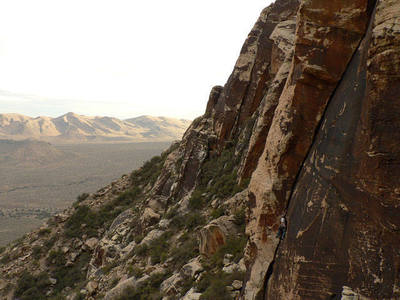 AJ higher up on Cadillac Crack. 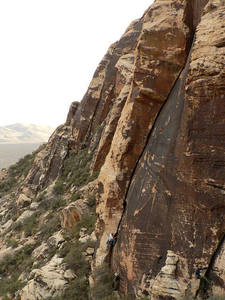 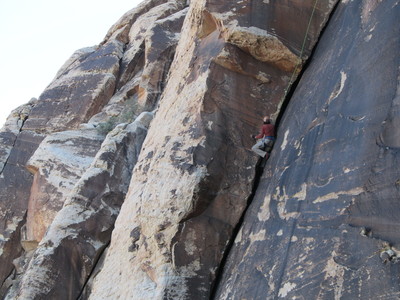 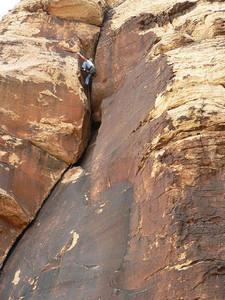