Trespassers Will Be Violated

On the large west face of Little Hunk is an obvious rising dike system. Trespassers follows the entire dike up and right to reach to top of the formation. It is easily the most obvious and compelling line on the formation and the first route done on the face.

A High School Junior named Matt Cox showed up with bolt kit in hand, ready to make the first ascent. But as Matt started up the dike, he soon found a bolt, then spotted 2 more. Thinking the route had already been climbed, Matt put the drill away and proceeded to climb toward the top. In the process, he kept it calm as he encountered the 10c crux, some 15+ feet out from the 2nd bolt.

Later, Matt and Spencer learned that the route had been bolted on rappel (considered very bad style back then) by climbers who intended to come back and add a few more bolts before trying to lead it. Matt's bold lead nixed thier plans for a FA.

The route was named for an old "No Trespassing" sign found near the vicinity of Abstract Roller Disco and the feeling derived from leading the route. In the 1980s, Charles Cole and Steve Anderson added a new route that crossed Trespassers (Gun Shy). One of the bolts on Gun Shy now provides additional protection for the crux of Trespassers, making it an exciting, but reasonable lead.

4 bolts (use bolt on Gun Shy); Medium gear for anchor. 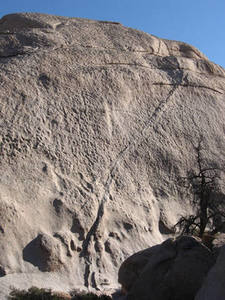 "Tresspassers Will Be Violated" follows the dik…

More About Trespassers Will Be Violated