Panama Red runs up the dark desert patina between Quivering Savages and Sweat Band. Scramble up the initial slab to the base of a right-arching seam on the headwall. A ladder of steep, positive crimps runs up the seam and the face above. Originally a top-rope problem, it was retrobolted into a sport route in the early '90s by some of my compatriots as I stood watch on the summit. Alas, this so offended a local (who had no involvement or history with the route) that he chopped it back to a toprope. Thus, goes another stupid battle in the bolt wars. Anyone interested in re-equipping the route has my blessing (I'll even subsidize the hardware). Otherwise, I'll take care of the task myself next time I'm in the area. Steep, continuous, fingery, positive climbing on bulletproof stone: it doesn't get much better than this. Definitely worth a lap after running up Sweat Band.

Top-rope from the bolt anchor above Sweatband. 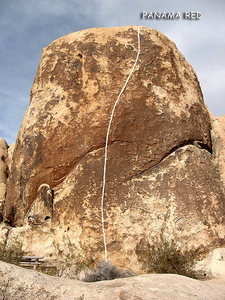