Roar of the Greasepaint

The sandstone here is easily damaged when wet. Please allow at least 24-48 hours before climbing after any precipitation. If the ground is at all damp, please do not climb on any local sandstone. Consider nearby options on basalt, limestone, granite, or plastic instead.

This route might be the best route on the "Circus Wall" section of the Island In the Sky, and at the very least makes a great warm-up for the longer routes on Aftershock Wall. The route is 2 pitches, but is easily lead as a single 50 M pitch. Approach Circus Wall via the Pioneer Names Trail and stop at the slab at the base of the names cave.

P1: (30M, 5.10b) "Roar Of the Greasepaint" scrambles up into the Names cave and then moves out it's top left edge (5.6, S) to clip a single pin before pulling a heady 5.9 move to get to the second pin. From there the route ascends up and right past Army drilled angles on good crimps and slopes toward a chain anchor. The first pitch is ~80' of technical climbing, with the crux perhaps 2/3 of the way up. Upon reaching the chains, the climber can (should!) continue one of 2 options for Pitch 2:

P2a: (20M, 5.9-) From the belay atop P1, climb up and left past 4 or 5 pins and then up (spaced more widely than P1, but just fine versus the grade of this pitch) and at last minute back right to a second chain-anchor above a sloping ledge. If you have continued directly without stopping on P1's anchor (better that way) do not clip the chains, and use a long draw on the last bolt of P1 & the first bolt of P2 to avoid the zig-zag-drag blues.

P2b: (20M, 5.9+) From the belay atop of P1, climb up and right past a single drilled angle to reach an early crux (9+) on some insecure holds. Pass this and continue directly up on easier moves to reach the same anchor as per P2a. This variation is harder than the other only at the crux and does produce less drag that P2a if all done as a single continuous pitch.

To descend rap with 2 single rope raps (60M works) of with a single double-rope rap. Since there are variations of P2, we did the climb as a single pitch, then rapped to the Anchor on P1 and did the variation independently before rapping the the base.

The route is rated 10a in the books published, but my partner and I both found it to have a harder crux move on the first pitch (10b or 10c). Then again, we were neither warmed up nor 'dialed in' to the area.

A rack of Draws- 10 if breaking this into 2 pitches, 14+ 2 long slings if you want to run them together. 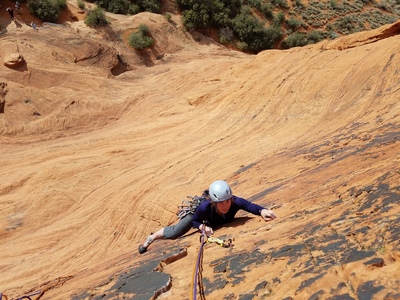 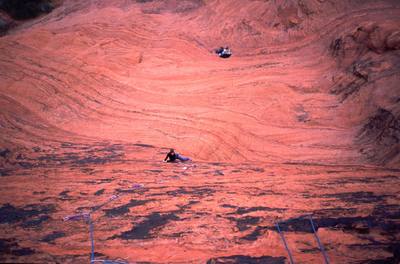 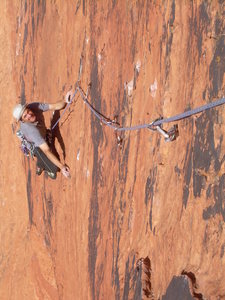 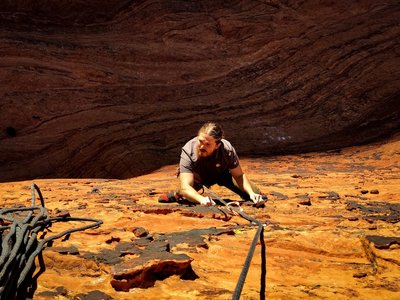 Tuker near the finish of P2. 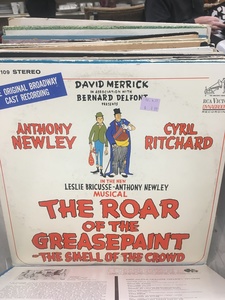 Found in a goodwill store in LA 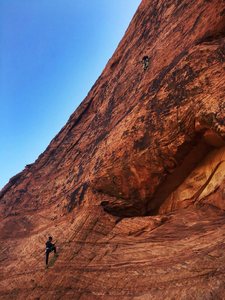 Worried about taking a fall with belayer in cav… 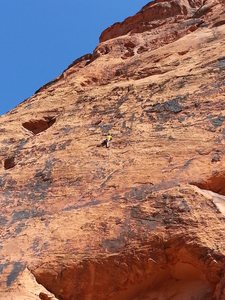 Running both pitches together. 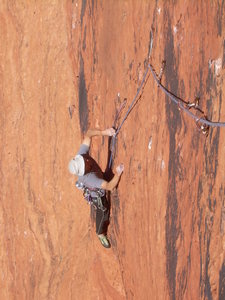 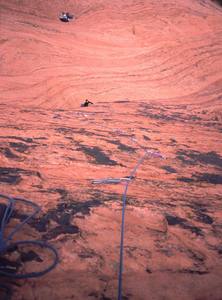 Tony Bubb starts up 'Roar Of the Greasepaint (1… 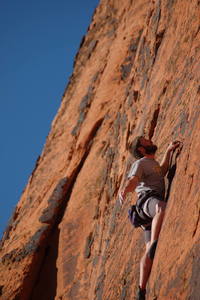 More About Roar of the Greasepaint