This route is on the East face of the Tricounai Nail. I had not been on this route since doing the first ascent some 20 years ago. I just repeated the route a few weeks ago and think it is a good quality route, with typical classic Needles Spice!! It is a bit committing & a little hairy leading past the bolt but the fall would be clean.

Just some background history. It was climbed around 1984 by Charlie Fowler & myself from the ground up with no previous knowledge. It was  never reported, that I know of, until now. We had not done the other route on the Nail or rapped and previewed this route. I was looking for an FA to do in this area & chose the line, lead up and laboriously placed the bolt on lead and then came down for a rest. I let Charlie go up while I rested, which may or may not have been a mistake, depending on how you look at it. He got to lead the spicy section above the bolt on the first ascent. It climbs the obvious crack/flake that ends one third of the way up the east face.

Start up the slightly overhanging discontinous crack with friends for protection to start and small nuts and RP's for pro at the top of the crack.

Climb the crack to it's end. Make moves left to a bolt/placed on lead. Then climb hard moves past the bolt and a bit of a runout section up and then left to easier ground and join the Cerberus route at its last bolt before the summit. Finish on the last few feet of Cerberus.

I just lead and repeated the route recently and found the original 5/16th bolt I placed in 1/4 in hole in 1984 still there! Hopefully someone will find the route worthy and upgrade the bolt at some point in the future as it would not be good if this bolt failed in the event of a fall as it is very old. I think the rating is somewhere between hard 5.10 and easy 5.11 but would like future ascents to determine the rating.

One bolt was placed on lead. Crack takes friends and small nuts and RP's at the top. 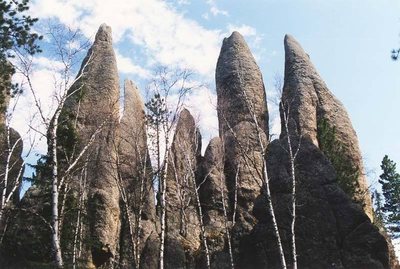 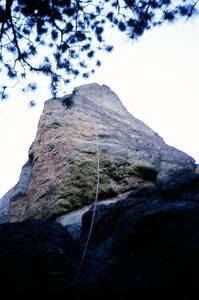 A rope hangs down the face of the Rotert/Fowler…