While not as numerous as the Labyrinth Area a little further up the road, Flag Rock has some excellent bouldering to explore. The Flag Rock Recreation Area, also known as "Norton's Mountain Masterpiece", rests within 25 developed acres including the Flag Rock Overlook. This park was named after the German immigrant Karl Matuszczyk, who planted an American Flag on this large sandstone outcropping of rock in the 1920's.

You can get a panoramic view of downtown Norton and the surrounding area from Flag Rock. Numerous picnic tables are scattered throughout the park with two rental shelters that have large covered grill areas, fireplaces, electric and water. Restroom facilities are walking distance of the two covered rental shelters.

Also located at the two rental shelters are playground equipment as well as a field for other recreational activities, Rates for each of these covered shelters are $50.00 per day. Camping facilities are available in both upper and lower campgrounds. Both campgrounds have bathhouses with hot showers. The campsites are available on a first come first serve basis for only $15.00 per night.

For the avid walker, a hiking trail runs from the upper campground to the Norton Reservoir, which is seasonally stocked with rainbow trout.

The Flag Rock Recreation area is located on Rt. 619, Three miles above the City of Norton. 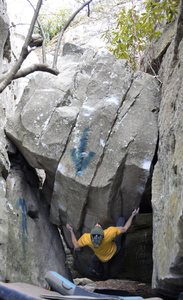 Parlier on the FA of "Diamonds Are Forever"

All Photos Within Flag Rock Bouldering