Be Careful What You Wish For! Bouldering

Routes in Be Careful What You Wish For!

"It was called the 80's! Ford was President, Nixon was in the White House, and FDR was running this country into the ground. I was bumming in a hole in the wall town in what is now called Utah. Some fellow from Colorado shows up - starts making all kinds of so-called improvements, right? Before we knew what hit us, the streets were running with lattes!

It got so bad that a fellow that liked to, you know, smoke a little grass or drink a little ripple. Crow like a rooster! Maybe challenge the mayor's son to a gentlemen's duel, is uncouth, Against God! and bad for real estate values. Stumpy had to GO!

Richard, be careful what you wish for.

Be careful what you wish for!"

Movie quotes aside, this massive boulder presents many fine lines, plenty of which are scary high. It's huge, and looks to be entirely unclimbed judging by all the lichen I cleaned off and holds I broke. Correct me if I'm wrong and lines have been done. In my opinion this is the go-to boulder in the area and will eventually see a few more-difficult lines put up by those braver than I.

Find this massive 40' boulder on the middle of the ridge above a wash on either side. both washes present a good parking area and the boulder can be accessed from the north or south. ~75' from the road or less. 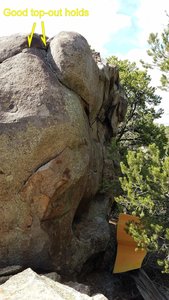 All Photos Within Be Careful What You Wish For!


More About Be Careful What You Wish For!