Disclaimer: I am not a boulderer, that being said I recently took a walk with Donovan Spaulding through many of the boulders and past several the climbs done by (and put in by!???) Jonathan Guinther and "Old Timer". I have to say I was impressed with the beauty of the rock, and perhaps most by the overall beauty of the surroundings.

Here is a place where the whole family could go and spend a great day.  Many (but certainly not all) of the landings are flat and pleasant. The approaches to the Campground Boulders, Tier 1 boulders and the "Slab" boulders are especially "user friendly" and easily negotiated by all. The base area around "Stop in French" is positively idyllic!

When bored with climbing, the river is feet from the car, and the great swimming area of lower falls is about 3/4 mile away. Passaconaway (aka "Dugway") road leads south from the Boulder Loop parking lot, is one of the most popular biking roads in NH and can be biked "back and forth" as a round trip for any distance; West Side Road is about 8 miles "downstream" and, by taking it east (right)  this can be combined with a short stretch on Rt 16 South (right) through Conway back to the "Kanc" and a circuit of about 15-20 (?) miles back to the Covered Bridge. If you do bike this road, be sure to stop and explore the many spots where short trails lead down to the striking Swift river.  Hiking Boulder Loop trail itself is one of the more popular hikes in NH.

Many, many of the boulders have seen no ascents at all. Even more are yet to be discovered. (On our rainy-day walk Donovan and I were in the "Slab Area" when we spotted a boulder down below us with a nice flat face...."Oh that must be down the hill in Tier 1, right?" Originally Donovan agreed, but when we walked the 75+/- feet, it was an entirely new boulder he had never seen before!)  Of course, brushes, maybe a top rope, or step ladder, are in order if your goal is a FA, but there are many problems that have been cleaned.

About the Re-Org - In June 2012 "Old Timer" submitted the "Parking Lot Boulders" area with 7 problems, and in Sept. 2012-14 Jon(athan) Guinther submitted "Boulder Loop Trail Bouldering" with 18 problems. Jon added Google-Earth map(s) with flags which showed the relative positions of many of the boulders.  In 2020 Dovovan Spaulding and Dominick Lentini became impressed with the area and started repeating problems  and cleaning new ones. The COMMENTs section indicated that improvements could be made to the "Getting There" sections, as well as the overall organization.

After walking around the area(s) we will be splitting into new sub-areas and moving the existing climbs, where they can be identified, into these new areas. As of today (Aug 3rd) it is mostly completed and the last major part seems to be the "Parking Lot Boulder" problems. The climber who submitted this is planning to come up and we should be able to integrate the problems in that sub-area into the present 7 sub-areas. At present, the following "new" sub-areas have been created:

01. "Slab Area" - as far as we can determine this area was not reported previously. It is approached by a path that starts just beyond the low-angle slab across from the Covered Bridge itself, (and before the gate across the fire road.)

02. " Tier 1 " - The boulders to the left of the Boulder Loop Hiking trail, but before the split in that trail. Many of the problems and boulders in this area were explored and reported by Jon and "Old Timer" and exist in their sub-areas "Boulder Loop Trail Bouldering" and "Parking Lot Boulders".

03. "Tier 2" - This appears to be relatively a newly develop(ing) area. At present it seems that it does NOT contain boulder problems that were reported either of the two earlier sub-areas. It is located on a separate level above Tier 1.

05. "Tier 1 Right of Trail" - While I, personally, know of no problems on these boulders, they do look like there might be some development possible here. Photos are posted for those interested.

06. "Campground Boulders" - These are the Boulders located on the right of the hiking trail, and run roughly parallel to that trail from just before the split to just after where the trail "splits". Many of the existing problems were reported by Jon.

07. "Beyond "Lurp" Boulders" - These would be the boulders beyond the boulder "Lurp" on either side of the hiking trail, and a little beyond where the hiking trail passes "through" two huge boulders on stone steps.  (Originally called "Below the Cliff Boulders", it seemed reasonable to "save" that name for boulders in the talus field immediately below the Main Face cliff.)

From Rt 16 in the Conway area, drive about 6 miles west on the Kancamangus Highway (NH Rt 112 West) to the Albany Covered Bridge turn-off.  Turn in and cross the bridge. Park about 0.1 mile south of the bridge at the Boulder Loop Trail parking. [ WMNF day-use fee, or buy one of the yearly passes]  If the bridge is closed ( It is usually closed for winter) park on the Kancamangus side of the  bridge at the Albany Cover Bridge Parking (same fee) and walk the "extra" 0.1 Mi across the bridge.

From the Plymouth / Lincoln / Rt 93 area: Exit Rt 93 at Lincoln, and take the "Kancamamgus Highway (Rt 112 East) about 25 miles East to the turnoff for Albany Covered Bridge.  This turnoff is about 3/4 mile east of the popular Lower Falls swimming "holes".

GPS Locator on the map is set for the Boulder Loop Parking area. 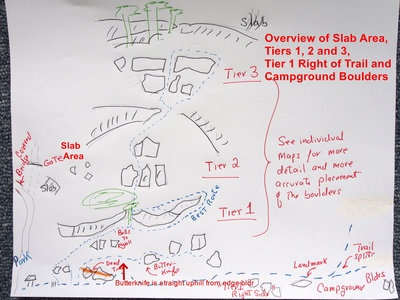 Overview Map of the General Location of the Sub… 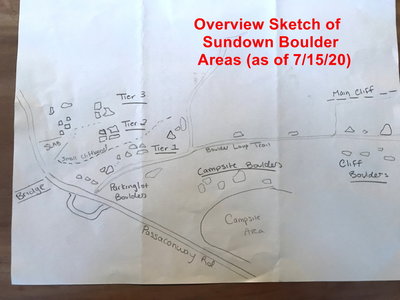