The right (east) side, all roped climbing, is owned by Village of Hanover, which seems ambivalent to climbing. Left side, bouldering, is private property, but the owner has not had a problem with climbing SO FAR. Continued access is far from guaranteed! Rapidly growing crag traffic has become a potential issue.

On the bouldering (west) side, please do not hang out up top or go exploring above the main cliff line. It is private property and we need to keep a low profile. The owner has been hands off so far. Let's try to ensure things stay that way please. Hanging out up top could cause problems with the property owner.

Please do not climb above the roped climbs. Hanging out on the edge of the cliff without ropes is dangerous and the last thing we want is to have an ambulance/injury/fatality there. Please don't endanger crag access through short-sighted behavior!

Please be upstanders and take good care of the crag to help preserve access. Don't leave your trash, and even pack out any trash somebody else might have left behind.

Called "The Cave" for obvious reasons, this is also called the Poison Ivy Wall because there was a time when it was nothing but a wall of green. Trees of poison ivy, I do not exaggerate. Suffice it to say, I don't fuck around when it comes to unbearably itchy skin rashes, and the vines are no more. What we discovered under all those leaves of three is some of the funnest steepest sport climbing around. The Cave likely has the highest density of mid-11s anywhere in Ohio!

Most of the routes were first bolted like RRG routes - up through the steep stuff and ignoring the slab above. Climbed that way, they are short and sweet with only a handful of bolts, but they can pack a punch!  More or less roped bouldering. A handful lines were originally conceived as going all the way to the top though, including Reach for your Dreams, not necessarily recommended for those of shorter stature, Broken Dreams, an 11d heartbreaker, Wet Dreams, which takes you up a big red crack, as well as two great trad lines. Now, extensions have been added such that 4 more short routes can also be topped out, with some very cool and quite tricky lower-angle climbing on the upper sections. The extensions are listed as separate routes, and the lower anchors are all still in place.

Some parts of the wall, particularly the cracks, will be dripping until early summer, but many of the routes on the faces between cracks will be more or less dry year round.

Think you are fit? Want to check your endurance level? Try the "Cave in a Day" challenge. The goal is to send all the short steep sport lines on the Poison Ivy Wall in a day -- that's from "Jugs for Thugs" to "Roofs for Goofs." Ten routes total. Nothing harder than 11d, but all but two of them are 11's.  Short, yes, but they are steep! PM me to have your name listed here as an official Marne Rd badass.  Up your game and time yourself!

Enter from the main access trail along Marne Rd (please don't come in behind the sewage treatment plant). As you enter, go right along the cliff line past Warmup Wall and Katz Wall until you come to the obvious large cave. 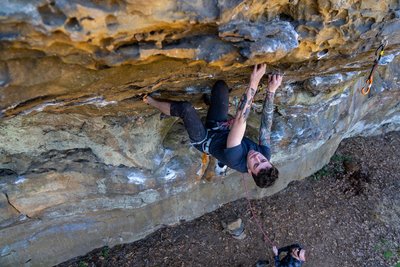 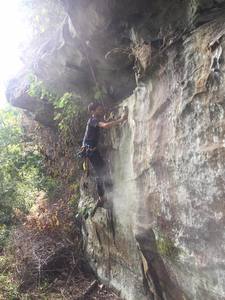 This is not the end of poison ivy... but we wer… 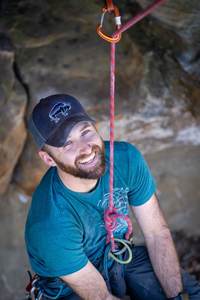 Ross Pipes enjoying a rest from the steepness o…

All Photos Within Poison Ivy Wall ("The Cave")