Areas in Spiti Valley and Kaza

The majority of climbing that happens in the Spiti valley is Ice - so, understandably, it happens in the winter. There is some mountaineering here, but due to the topography, there are not a very large amount of peaks, and some of the climbing is regulated by local beliefs.

The Spiti valley is India's first Ice Climbing destination - it's where the first group of Indian ice climbers came to look for ice in 2014-15. Since then, ice climbing has grown a lot, and Spiti is also home to the Piti Dharr ice festival. There are about 40 or so ice routes here.

Most climbed routes are around, or near, Kaza, but there is ice everywhere. Since getting around in winters can be difficult (or impossible), the higher reaches of the valley still have a large amount of Unclimbed ice.

If you plan to climb here, there are a few logistical concerns that supercede actual climbing concerns. First off, it is important for you to have a car that runs on Petrol (as it is less likely to gel). It is possible to hire a taxi to take you to and from climbing spots. Keep in mind that there is close to zero possibility of a rescue, if things go awry. The closest decent hospital is in Shimla, though there is some health care in the local hospital.

Please, also keep in mind that this is a culturally and ecologically sensitive area.

In the summers, there are a few ways to get to Spiti. You can drive from Manali, over the Rohtang La and Kunzum La. If you are intrepid enough, you can walk over passes like the Parang La.

In the winter, though, there is only one way - by road from Shimla. This can take one or two days. Taxis and buses are available. If you are driving yourself, you'll need a 4x4 car, and you'll need to carry chains. The road is treacherous, and is a no-fall zone.

It may also be possible to fly in via helicopter if you have deep pockets. 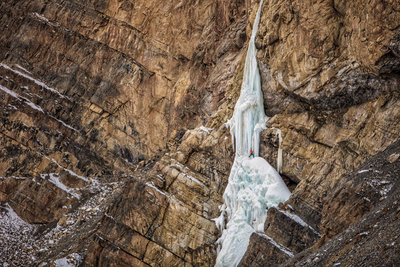 Karsten Delap on the second pitch of Snow Leopard

All Photos Within Spiti Valley and Kaza


More About Spiti Valley and Kaza