Routes in A Sinistra Del Bivacco

This crag has 17 routes between 5.9 and 5.12c (and one aid route). It has a high concentration of easy routes, with 6 routes 5.10a or under. It has a cave feature and a number of the easy routes are short ones protected by the overhang.

The A Sinistra Del Bivacco crag is on the same rock feature as the cave where you park, Rocchetta II but on the opposite side. From left of the parking take trail 134 down and wrap around the feature moving to the right for a long way. A Sinistra Del Bivacco has a cave with a number of easy short routes in it and is the second to last crag on the rock feature before you come back out to the road on the other side. It is also close to where the trail takes you to the next large rock feature, Rocchetta IV. 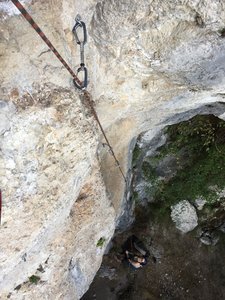 All Photos Within A Sinistra Del Bivacco


More About A Sinistra Del Bivacco