A small, newly independent country in the located in the middle of the Balkans, much of Kosovo is rolling plains. It's borders are mostly defined by mountain ranges and there is some established climbing in the east of the country right outside the town of Peja (also written as Peć, Пећ, or Pejë) in the Rugova Canyon.

With the use of tool like google translate, information on the local scene around Peja can be found here: marimangat.org/ngjitje.html

Fly to the capital Pristina or drive in from one of the surrounding countries such as Montenegro, Albania, or Northern Macedonia. It is not recommended to drive into or out of Kosovo on the Serbian border due to ongoing disputes of the sovereignty of the country. The country is small and you can drive across it in a few hours. 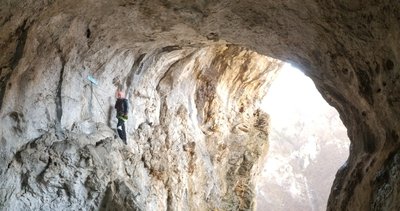 Dani enjoying another world-class the Via ferra…

All Photos Within Kosovo