The Fann mountains are the highest mountains of the Zarafshan Range, a range to the North of Dushanbe, traversing from the East to the West. This range, though smaller than the neighboring Pamir mountains to the East, are relatively easy to access, and beautiful. There are numerous lakes, glaciers, and of course massive peaks.

The most well known peak in the range is Chimtarga (5489m,18,009 ft) which has several established routes including a few technical routes up the south facing ridges, and a less-technical, though logistically more involved route up the snowy, relatively mild north slope. Other tall and notable climbs in the area include routes on Energia (5120m/16798ft), Zamok (5070m/16634ft), and Chapdara (5050m/16568ft) among many others. There are a number of routes establish by Russian and Eastern European climbers on the more well-known peaks, but there is endless potential for new and exciting routes. Most of the rock I have encountered here is limestone, though at the lower altitudes sandstone and other sedimentary rock is common.

This is a beautiful and remote range. The people are hospitable and friendly, scenery breathtaking, and the mountains are huge!

Head north from Dushanbe on M34 roughly 110km. You will pass several towns and villages, most likely sheep and goats, a turn-off to 'Safed Dara' the local ski resort, a 5 km long tunnel, some mines, and a few more villages. Eventually you will drive through the village of Takfon and will see the turn-off to go to Iskandarkul and Sarytag, about 3 km later you will pass the town of Sarvoda, and see the turn-off that passes several villages and eventually leads to Vertical Camp, the access point for the highest peaks in the Fann group such as Chimtarga, Energia, Zamok, Big Ganza and Chapdara. If all goes well this takes about 2 hours. I recommend contacting one of the local tourism agencies to help organize logistics such as transportation and or donkeys if you are headed up high with heavy loads. 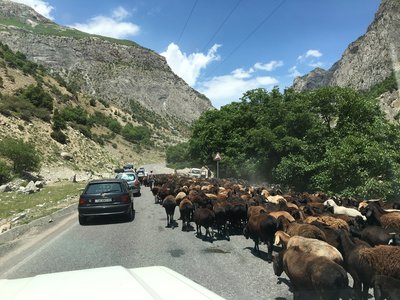 On the road towards the mountains 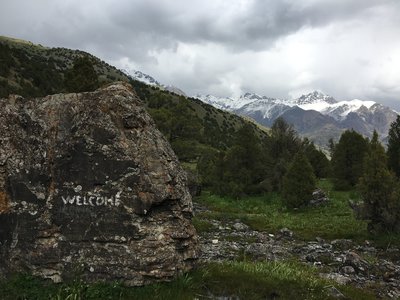 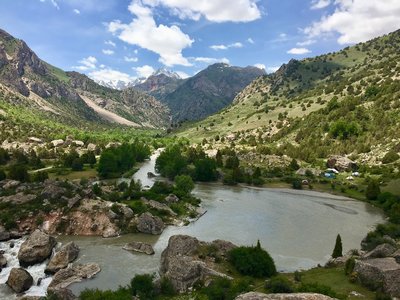 up river from the village of Sarytag 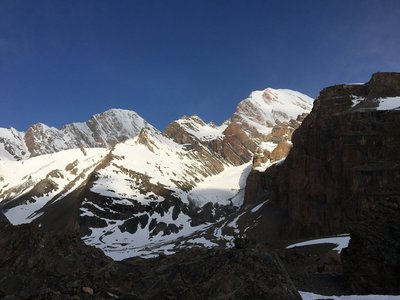 All Photos Within Fann Mountains