The train never ran. The railroad tracks are abandoned, the only traffic they see are from people fishing the river.
The bridge leading to the tracks now have an increased amount of NO TRESPASSING signs.

Coaldale is also known as Cottonwood Rock. There are some decent routes amidst chossy granite here. It is definitely not a destination crag (if you're this far south, just go to Shelf Rd.!), but it may be worth exploring if you've done everything else in Arkansas Valley or want to combine cragging with a day of fishing.

EDIT: recently a climber's trip report claimed that the locals do not take kindly to climbers using the bridge and railroad tracks for access. While these aggressive encounters are rare, it is always good practice to respect private property and be kind to locals and landowners. In the meantime I'm personally looking into the access issue to see if there has recently been a change in ownership or any significant event that lead to the alleged encounter.

The wall is broken into two sections by an obvious rockslide over a shelf about 2/3s the way up the rock. I've described routes as being either part of the higher "Upper Wall" section or the bottom "Lower Wall" section.

Note: most routes aren't officially named. If you're familiar with the area, please submit improvements!

From Coaldale, cross the river that runs next to town, and drive to the end of the road (not long). Follow river downstream just under a mile walking on abandoned railroad tracks. This crag will be on your left. 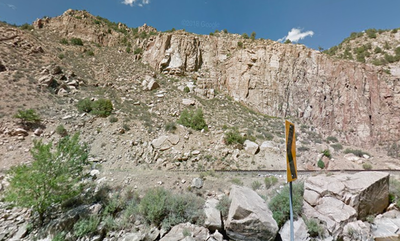 All Photos Within Coaldale