Currently a project has been set in motion in cooperation between the NJ Department of Transportation.  The project centers around the federal highway (Route 80) measures to reduce or prevent rockfall from impacting the highway. Access to the recreational area is not planned to be impacted and the potential exists for enhancements.  More information can be found on the NJDOT project website (nj.gov/transportation/works… ), Access Fund website, Northeast Mountain Guiding Facebook page or the local newspapers.

This is one of New Jersey's best climbing areas! The Delaware Water Gap National Recreation has a wide variety of climbing and is one of the oldest climbing areas in the United States. This was the first known "vacation getaway spot" in the United States which expanded into the Pocono Mountains in the early 1900's. The largest section of climbing is on Mount Tammany toward the park's Southern end by the Delaware River and Interstate 80. There's several other climbing locations along the South facing ridge. Ricks Rocks, on the Northern end of the park, is a popular area for scouting organizations, summer camps, youth groups, etc. due to it's ease of top-rope set up. On the Western side of the park along Old Mine Road there's several small outcrops and slabs offering some fun climbing. This park is maintained by the National Park Service. Their office is located on the Western side of the park in Bushkill PA.

Mount Tammany: Most of the climbing here is single or multi-pitch and requires traditional climbing protection. Some routes have bolts on them but in very "unprotectable" or runout sections. Several bolted rappel stations exist here and are well maintained by local climbers. A standard rack of stoppers/nuts, cams up to 3 inch and a small set of tri-cams is perfect for almost every route. Some of the more technical routes may require some aid hooks or a larger cam so reference the route description/beta for details.

Ricks Rocks: This is all top-roping and single-pitch climbing in this section. This section sees a lot of traffic during the summer months due to it's quick access to the road and parking and also it's ease of set up to climb. Bring a long static line to set up anchors here as the boulders, trees and bolts are set back 25 to 40 feet from the cliff edge.

Out of print guidebooks but can still be found: Climbing Guide to the Delaware Water Gap by Michael Steele

Rock & Ice in the Gap by Hugh Dougher

Parking: For Mount Tammany you can park in the Appalachian Trail parking area on Interstate 80 or the Interstate 80 rest stop right next to it. Do NOT park along Interstate 80. For Ricks Rocks there's a designated parking pull-off for climber access. Info on that can be found on the Ricks Rocks page.

Ricks Rocks: This section of the park can be accessed by traveling West from State Route 94 out of Blairstown along Millbrook Road toward the Kittatinny Ridge. Google Map Link 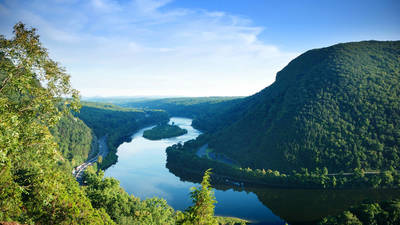