Disclaimer; The Doyle Boulders have had (though not extensive) a significant amount of activity over at least the past 30 or more years. That history has remained elusive and not formally documented in any capacity over the years. Many of the Boulders here have been explored, and many of the routes done over the years by various parties. It’s hard to say what has been climbed. A good indication is signs of cleaning (removed flakes, scars, groomed landings etc..) but not exclusively as many of the boulders here require no cleaning. As a result, many of the names given to boulders and problems may not be the originals. If you know what they are, who did them and what they were originally called, feel free to update that information. Least the efforts of the past be subject to the trash bins of history.

Tons of un-explored areas, excellent camping, hundreds of routes to be discovered and no one else in sight. You could spend weeks climbing here and never see another soul the entire time.

Doyle isn't an easy roadside cruise though. Its steep, with no trails, no amenities, no signs to point the way and no one to tell you what to do. The true wild west of climbing areas. The best way to get around is with a OHV. Be it a motorcycle, four wheeler, side by side or tricked out 4X4. The whole area is a OHV park complete with unloading parking areas, good dirt roads, side trails and single tracks. Its uncommon to see anyone else out here, but when you do, its not uncommon to see them riding a Quad with a crash pad strapped to the back. There are literally thousands of boulders spread out over a dozen square miles along the hillside waiting to be discovered. Though many of the roads are good, its still an area that will require 4WD for most roads and a high clearance vehicle doesn't hurt either. Sorry Subaru owners, gonna have to trade it in for a 4X4 truck or buy an OHV to access the majority of the routes here.

There are developed camp sites at the Fort Sage staging area which are rarely full or even occupied. Primitive campsites with vault toilets, concrete tables and fire rings. Be aware that this area is an OHV area and your neighbors might be hauling around trailers full of mechanized toys. So don’t be annoyed when they saddle up the entire family on motorcycles and rip out of there in the morning. You’re the oddball here, not them.

Doyle is divided into two sub areas: The West Face and Fort Sage areas The rock is generally of good quality, though it can tend to be on the grainy side and many of the problems can be sharp. Being one hour north west of Reno, Doyle is a convenient winter destination with many solid routes worth venturing to. Best time to climb here is on sunny days with temps between 35 to 55 degrees.

The area has had a long broken up history and many of the areas, boulders and problems have been known by everything from several different names over the years, to never being named at all. So one shouldn’t put too much care into what something is called on Mt Project. Names can be changed as the history unfolds. That being said, with the scattered history, lack of information and misinformation, feel free to submit updates and corrections to any of the areas, boulders and routes you may have some of this missing information on.

From Reno take highway 395 north for 42 miles towards Doyle. Right before Doyle exit the highway for Doyle Loop. Take Doyle Loop for half a mile over a one-way bridge and then turn right onto Hackstaff road. Follow Hackstaff road for a little less than a mile. When the pavement ends take the first right for The West Face Area. For The Fort Sage Area continue for about a mile and turn right onto Fort Sage Road. Follow this road for approximately a mile to an old jeep trail. Most low clearance two wheel drive vehicles can navigate this trail for a quarter mile to a parking area in front of the area information sign. Continue up the steep hill and follow the trail for half a mile to a fork and up the hill for The Rock Ridge boulders. 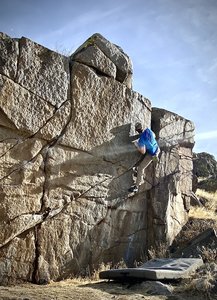 Slapping my way up the final moves to the top.

All Photos Within Doyle Area