A beautifully sculpted boulder situated near the top of the canyon (above the waterfall). Nothing about this boulder is easygoing but if you are willing to put in some effort, you will be rewarded with a world class chunk of stone in an amazing setting. Gets sun around 10:30am and goes into the shade around 4:00pm.

Middle Elden Canyon has a large network of social trails so hike times will depend a bit on familiarity with the area. With some experience a good consistent trail can be followed through the lower drainage.

Park either at the Skyline Dr. or Lugano Wy. trail easements (I prefer Lugano) and make your way via the many trails into the canyon. Follow trails in and out of the main drainage past many established boulders eventually leading to two prominent small cliff features on either side of the drainage about 75 yards before the often dry black waterfall. The right cliff feature has a handful of established trad and sport lines on it, such as Pazuzu.

Follow a path leading uphill just before the right cliff feature around the backside of the cliff past an obvious built landing/step. The quickest way is to scramble up a small slab to the left alongside the back of the cliff but an overgrown trail to the right can also be followed that converges back with the main trail. Once over the small slab follow a decently obvious trail up the steep hillside eventually leading to the second tier cliffband. Follow the trail left along the cliff around the corner and continue following the trail uphill paralleling the cliff leading to an obvious large amphitheater and a view of the boulder. Instead of walking down into the drainage and up the slickrock section, continue following the trail along the cliff eventually leading to the boulder. 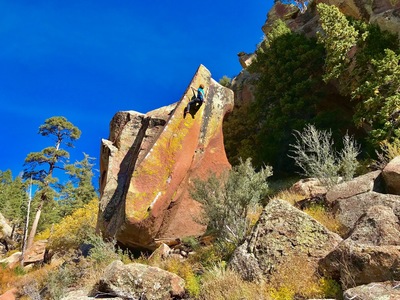 All Photos Within Hozho Boulder