This area has not been specifically approved for climbing by NJ Parks, and perhaps is completely of partly outside the Park, instead on State-owned land managed by the NJ Dept of Environmental Protection. Also there might be a concern of climbers parking disruptively outside the Route 206 Cranberry Lake commuter parking lot on busy days.
We heard a report that an official survey was performed for a point near this cliff sector, and at least this cliff is very close to the boundary -- like perhaps the top might be inside the Park and the bottom (or middle) might be outside. We do not yet know of any general rule of the DEP forbidding climbing, and as of 2018 this area is not posted for any special status or restrictions. There is no general NJ Parks rule forbidding climbing (after submitting a signed waiver of liability form for the current year).

25-35 ft routes around vertical on fun featured granite or granitic gneiss.
Faces WSW (so good bet for afternoon on a cool day). Much is shaded by mature trees, so not as hot as might expect on hot afternoons.

Lots more climbing nearby at sector Benes, just above SE.

Top-Roping: Obvious way to reach the top of this cliff to set up a top anchor is to scramble up around the right (south) side - (but likely also works to up around the left / north side).

First Ascents? When we started exploring this rock sector, we discovered lots of previous work (cleaning + cutting) to prepare the rock and cliff top and base and approaches for climbing. So we could focus on just trying different possible routes for climbing. Whoever did that work, please contact us so we can give proper credit for your First Ascents.

warning: Loose rock is still a concern in this sector. Belayer or other members of party should not stand anywhere near underneath the climber or underneath a leader setting up top anchor.

. . . (Lots of vegetation on this rock as of 2018. Be prepared when climbing to navigate around protruding trees and branches, and dealing with holds slippery with grass, lichen, moss, dirt).

Because there is serious question about whether this area is legal for climbing, we have moved its map location and GPS latitude longitude to an incorrect and impossible place and removed the instructions for how to get to it. We hope that in the near future it will be opened for climbing, and then we will restore the correct map location. 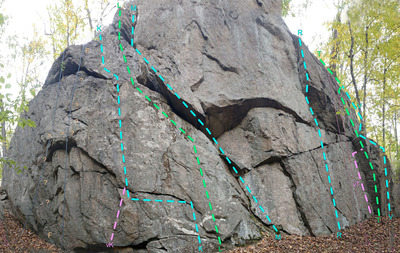 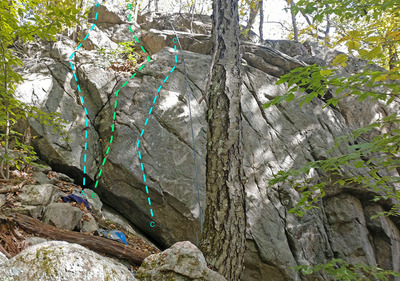 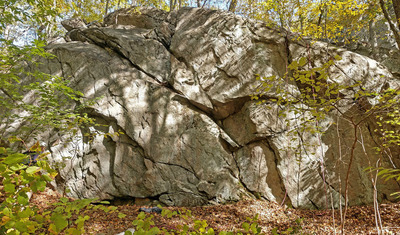 All Photos Within Clifford