Steep wall of quartzite, much almost vertical, some overhanging.
Faces South and SouthEast.

Name of this sector in French translates into English as "orange rocks".

Descent: Obvious way is just to rappel down whatever route you just climbed. First problem with walking down off the top is that first you have to reach the top (see difficulties under "Top-Roping"), and find the (unmarked) start of the descent route. Then since few people use the descent route, might be obstructed by pricker bushes (perhaps bring your own cutters?)

Descent route starts with a gully to the Right (East). Gully soon broadens, but avoid the temptation to try the more direct way close to the east side of the cliff. Instead at first stay high, along the base of  the cliff above, with feet mostly on rock holds. Sometimes need to find rock holds for hands. After a long gentle descending traverse, can go down steeper on open grass. Then traverse back west toward the side of the cliff. Finally down the low gully diagonal under the cliff.

Better to first lead an easier route, then figure out a safe way to get to the anchor of a route nearby.

note: Many of the bolts and hangers are Plated steel (not stainless / inox) installed before 2007.

warning: Loose or breaking rock is still a possibility in this area. If possible the belayer or other members of the party ought to stand far away from anywhere near underneath the climber.

It's just right around the corner from sector "Dalle Grise".

After walking up the obvious trail from Parking, where the trail up to the Dalle Blanche goes left up steep, continue gentle right until below the steep wall of this sector.
Or from the obvious platform at the base of the Dalle Blanche sector, walk steep down a little, then see a path horizontal left into a scramble move over an obstructing rock. Next the trail goes down rightward below the "Dalle Grise" slab and left around the corner to base of the steep wall. 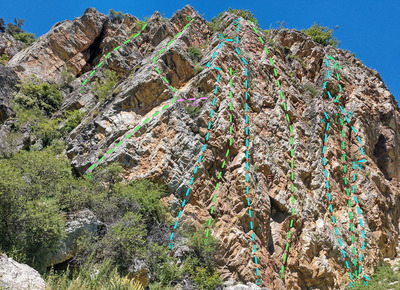 All Photos Within Rochers Oranges