This area has not been specifically approved for climbing by NJ Parks, and there might be a concern of climbers parking disruptively outside the Route 206 Cranberry Lake commuter parking lot on busy days.
Although there is no general Park rule forbidding climbing (after submitting a signed waiver of liability form for the current year), this area has not been specifically approved. One concern might be that a certified survey has not been performed to determine if this area is completely on NJ Park land. Likely some of the sectors are completely inside Allamuchy Mountain State Park, but others (especially sectors Ronca + Benes + Clifford) might be completely or partly outside the Park, instead on State-owned land managed by the NJ Dept of Environmental Protection. We do not yet know of any general rule of the DEP forbidding climbing, and as of 2018 this area is not posted for any special status or restrictions.
Another concern might be lack of approved trails to access the bottom or top of some of the cliff sectors.

This set of quiet crags about 30-70 feet tall offers mainly Top-Roping from natural anchors - (no bolts). In Allamuchy Mountain State Park about 4 miles N from I-80, around Andover and Byram Township just north from Cranberry Lake.

- > The cliffs in this area have not yet been specifically approved for technical rock climbing by the management of the State Park.

Rock is granite or granitic gneiss. Facing mainly West, and some South (so good for cool-weather days). Base and lower half of most routes is shaded by mature trees, so not as hot as might expect on hot-weather days.

Not much climbed yet, so come prepared to manage loose + falling rock, with holds obscured by vegetation and dirt, slippery unmarked scrambles to set up top anchors.

We are most grateful to Jared Brewster for recognizing the potential of these crags for roped climbing and showing them to us.

When we started exploring further ourselves, we discovered lots of previous work (cleaning + cutting) to prepare the rock and approaches for climbing. So we could just focus on trying different possible routes for climbing. Whoever did that work, please contact us so we can give proper credit for your First Ascents - (if you were hoping to keep these crags secret, well we're not going along with that).

No bolts are permitted (as of 2018), according to a paper which we were given at the Stephens State Park office.

FAs + style + Naming of routes:
Our philosophy is that the persons who do the work get to name the route. Since much of the rock here does not take good Trad protection, many of the routes are going to be Top-Rope. The persons who do the first Top-Rope of a route have done some work in figuring out how to set up an anchor and often some cleaning of the rock, and the effort of writing a description of the difficulty and quality of the climbing -- so that others in the climbing community can choose to enjoy that route. So those persons get listed in the FA TR entry for the route, and they have the privilege of giving a name to the route. But that does not mean that the correct "style" for that route is Top-Roping.

If another party then Leads the route, and carefully reports the quality and types and size ranges of protection, they have done some more difficult work of benefit to the community, then they have get to be listed as FA Lead for the route, and they have the privilege of giving their (new?) name for that route. Similarly if the Park someday allows bolting, the party that does the work of installing bolts (assuming that the community has not designated that route as Trad), and reports the composition of the hardware also gets to give a name to the route. Let us know what you did, and we'll be glad to make the change to the MountainProject description page for that route.

hazards: Main danger is loose or breaking rocks, so belayer or other members of party should not stand anywhere near underneath the climber or underneath a leader setting up top anchor.

Insect bites and stings can be a problem. Perhaps the worst places are sectors Crefeld + Stannard, since they often have standing water near base, in which bugs like to breed.

Ticks - take precautions and use practices to avoid (or afterward detect).

Snakes like to live near complicated rocks. There are different varieties around this area.

waiver of liability
signed form is required. We talked with a NJ State Park employee who said that an original signed printed paper form must be submitted to the Stephens State Park office (with a new original submitted in each future calendar year). If you drive to the office to deliver your waiver, they make a copy for you to keep.

The blank form can be obtained from that office, or can be downloaded from the Stephens State Park official web page (but not as of 2018 from the Allamuchy Park page). Or could try sending in the completed signed waiver form by mail, instead of driving over there.

. . . (Note that the cliff obvious above rt 206 looking north-bound is a slab on private land, is not Cranberry Hollow).

Approach hike: From N end of parking walk N flat about 1050 feet, soon crossing the asphalt North Shore Rd, onto 4-6 ft wide dirt path of Sussex Rail Trail to (N40.9591 W74.7388). Turn Left (W) onto hiking trail marked with green plastic squares. A little up then down into the first "pre-hollow", for about 1300 feet past some ponds with some ups and downs to reach the start of the steep section (with the first crag above right N). To reach the other crags, continue uphill about 580 feet to look west slightly down into the second "real hollow". See the Area page for each crag for how to get to it.
Effort: +150 vertical feet uphill over 0.6 mile distance (plus a bit more to reach each specific crag). Typical hiking time 13-25 minutes. 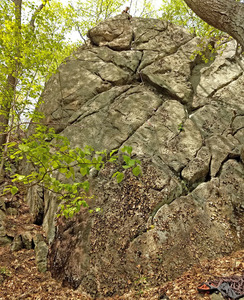 All Photos Within Cranberry Hollow