Falesia dos Olhos (Cliff of the Eyes) is a great climbing destination located near Sao Bento between the cities of Paraisopolis and Brasopolis in Minas Gerais. Since it is one of the very few locations that stays dry in the rain, it is a very popular crag during the rainy summer months (December to March). During this busy season, the majority of the popular routes are fixed with quickdraws. A large roof overhead provides protection from the rain, although the wall can still get wet in some parts. There are quite a few loose holds at this crag and quite a lot of glue as well.

There are a couple 5.10+ slab routes as well as a classic 5.11a route but the bulk of the climbing is solid 5.11 and harder with the best routes in the 5.12 range or harder. There is a good concentration of hard routes here with the difficulty topping out around 5.13+.

Climbers aren't the only ones that like the shelter from the rain as the crag is extremely popular with the local cow population. As such, the ground is literally just cow poop. Sounds pretty disgusting (and it is) but you get used to it after a while.

From the city of Sao Bento do Sapucai, head north towards Paraisopolis. You will reach signs to enter the city of Paraisopolis after about 15km; don't enter the city but rather stay right and continue towards Brazopolis. After approximately 9.8km, there will be a blue sign on the right side of the road that says "Limite de Municipio - Brazopolis - Paraisopolis." Turn right just after this sign and head down the driveway. Park on the right hand side as close to the fence as possible. Historically, the landowner that owns the house near the parking has allowed climbers to access the road / trail that leads to the climbing. As of early 2018, the access trail has changed. Check with local climbers for updates. 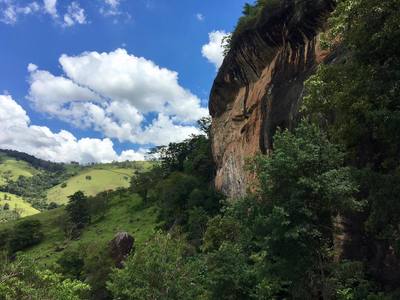 All Photos Within Falesia dos Olhos