A French but fiercely independent island in the Mediterranean, Corsica has a wealth of rock climbing opportunities sprinkled across all points of the compass.

While there’s a number of rock types on the island, including limestone, sandstone and conglomerate, the climbing is most famously on the granite and specifically the tafoni.

With peaks nearing 9000 feet tall, the island is predominantly mountainous. The scrappy nature of the scenery, with the legendarily scratchy and somewhat impenetrable maquis, adds a sense of adventure (ha!) to some of the longer approaches. Long pants recommended for the terrain d’aventure.

The fourth largest island in the Med, Corsica has a reputation for seriousness for some of its climbing, certainly some well deserved. But really, there is rock climbing for every level and ability. Navigating vandalized street signs, dodging wild pigs and their stealthy goat cohorts, unspoiled beaches, nationalistic and sometimes protective landowners, rusty fixed protection…all conspire to keep ones wits sharp and provide a sense of exploration.

A brief smattering of a few of the popular climbing locations:

Bastia: The northern finger-shaped peninsula is home to a more than a dozen of sports climbing venues both beach and inland. The main non-granite area on the island.

Col de Bavella: Likely the most popular and well known of the venues on Corsica. Short routes, long, very hard routes, with everything in between. Stunning craggy scenery with plenty of adventure.

Fly into one of the international airfields on the island: Ajaccio, Bastia, Calvi or Figari.

Take a ferry from either France or Italy. Main ferry ports at Bastia, Ajaccio, L'Île-Rousse and Calvi. Propriano and Porto Vecchio seasonally served from France (Marseille), Bonifacio from Sardinia. 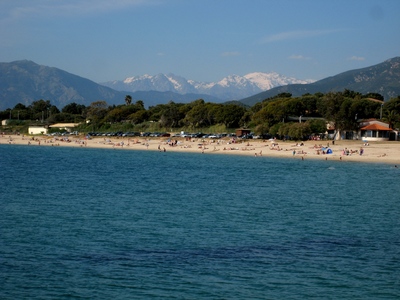 View toward the beach by the Ajaccio airport. 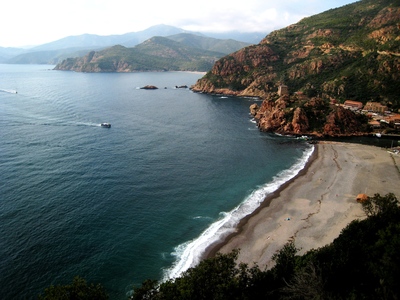 Scenic Portu on the island of Corsica 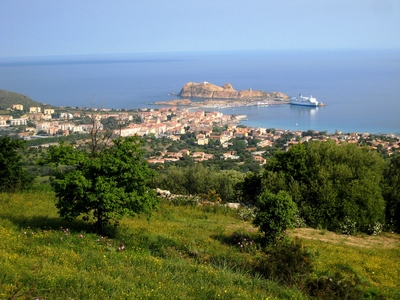 All Photos Within Corsica